“Trees are the earth’s endless effort to speak to the listening heavens.” Rabindranath Tagore

All of us who garden are acutely aware of our environment. As we dig in the soil, we connect with the magical realm of Mother Earth and the results of our work are the rewards bestowed upon us for our efforts. This April, we celebrate monumental efforts made by others to conserve our precious planet. And in light of the horrific catastrophe in Japan, perhaps we should revisit the past to find instructions for the future.

First to be considered is our oldest conservation effort, National Arbor Day, which is celebrated each year on April 22nd, the birthday of its founder Sterling J. Morris. Mr. Morris, the publisher of a Nebraska newspaper, began a campaign to encourage his community in the planting of trees almost 140 years ago. The plains of Nebraska were bare and almost treeless when he began his efforts and by 1885 Arbor Day was declared a state holiday. Since then, due to Mr. Morris and his vision, Arbor Day is embraced by all of the states.

Arbor means tree in Latin. The Arbor Foundation annually gives away thousands of trees to individuals and communities. There is a wonderful pleasure in watching a tiny sprout grow into a young sapling and then continue on until it becomes a magnificent tree. Many Indian tribes planted a tree with the birth of a child and watched as both the tree and child matured. We adopted that custom when our children were little and it is truly wonderful to see the height and breadth of the trees we planted on the first birthdays of our now grown sons and daughter.

Secondly, we have Rachael Carson to thank for her efforts to bring to light the hazards of chemical toxicity. A marine biologist by profession, she noted the unprecedented losses of plant and animal life and her research concluded it was the result of chemical poisonings. Following WWII, America embarked on a path of chemical use that was not only unexplored but tenacious at best. DDT, which killed all insects good or bad, was at first considered a miracle. With it the mosquito became a thing of the past as neighborhoods full of children were regularly fogged. As a child I recall riding my bicycle in and out of the dense fog as the truck slowly rolled by! Finally banned in 1972 and considered one of the most hazardous chemical carcinogens ever created, one wonders what people were thinking. Ms. Carson lived only a few years past publication of her monumental work ‘Silent Spring’ but her legacy of thoughtful research alerted a grateful nation. The title alone was an ominous prediction of a world without the buzzing of bees, the song of birds, the croaking of frogs, the splash of fish. 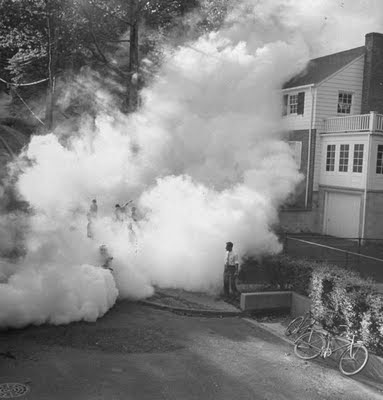 Following in her footsteps was Senator Gaylord Nelson, who first initiated the concept of ‘Earth Day’. By the early 1960’s America’s love affair with chemicals had begun to take a terrible toll. The environmental degradation was becoming astonishingly evident so Senator Nelson first presented his concerns to President Kennedy in 1962. The evidence was conclusive yet the environment would not be on the political agenda for almost a decade. Finally on November 30, 1969, the New York Times ran an article which read “Rising concern about the environmental crisis is sweeping the nation’s campuses with an intensity that is on its way to eclipsing student discontent over the war in Vietnam.”, thus setting the stage for the first official celebration of ‘Earth Day’.

The enormity of this grassroots effort held on April 20, 1970 was the impetus for the creation of the Environmental Protection Agency later that year. The mission of the EPA is to protect human health and the environment. It is expected that Earth Day will be celebrated by over 500 million people in 175 countries. Short of planting a tree this April, we should at least hug one!
Posted by Catherine Dougherty at 8:28 AM