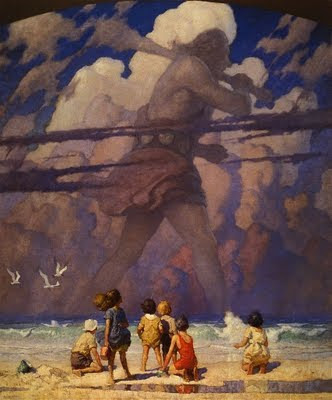 April 29, 2009
I have always loved storms since early childhood and have a memory of being about four standing on a covered porch with my Father. We were watching horizontal rain, seeing bright lightening, and hearing the crashing and the roar of a storm. As an explanation my father told me it was nothing more than the ‘Old Man beating his thunder drum’. It was very exciting and that sense of excitement never left me. I have always experienced a rush almost akin to sexual excitement whenever a storm begins to build.

I have a friend who moved from Oklahoma to Portland to follow her lover. Early in her stay they were taking a walk when it began to mist. Oklahoma training kicked in and she bolted for the nearest store awning, seeking refuge from the inevitable onslaught. He followed and asked why her sudden lurch. She replied, ‘Isn't all hell getting ready to break loose?’ ‘No, its just rain’, he said. She was dumbfounded as she waited for the sudden drenching downpour, the 30 to 40 mile and hour winds, the roar and crash of the storm… it never arrived. The rain was gentle and soothing, a fine mist that could be walked through and enjoyed without terror. She was enthralled, married him, and still lives in Portland.

Not me! I could not survive without the excitement of breathlessly waiting, watching as the dark and darker clouds begin to form then swell and roll, churning in gigantic swirling motions, increasing in velocity with each passing moment. The wind begins and can be heard traveling through the trees minutes before it hits, rustling at first then twisting the branches in violent whirling circles. It builds to a crescendo and arrives with a deafening voice all its own making
communication available only through shouting. Your face is pelted with tiny particles of dust picked up from neighboring fields and the sky becomes black.

Standing in a field as this happens is enthralling, exciting and your heart begins to pound as your hair and clothing are whipped and you are barely able to keep your footing. And then the lightning begins to crack. One, two, three, four… counting while waiting for the thunder to tell you how many miles before the rain arrives. If the first drops are big, then hail will be within the storm; if they are small, it will be wind whipped horizontal sheets.

When we had horses, they would sense what was coming and begin pacing restlessly, neighing with uneasiness hours before the storms arrived. They would rear and paw the air as if it was alive with a force that they could defeat in a battle. We would release them from the paddock and they would run splashing through the creek, galloping to out run the approaching elements.

As the children grew, they studied cloud formations and raced to the North field to watch as tornados formed overhead. We saw the May third 1999 tornado form and watched as it moved to I-40 to follow the high way path to destruction in Oklahoma City; it was huge from the very beginning. We even had to out run one once. We saw black clouds to the North and had loaded into the station wagon to go to the top of the hill to check out the storm; it was sunny overhead. As we drove the storm suddenly blew out from the edge and a funnel snaked from the cloud, smashing to the ground on the hill in front of us, picking up dust and roaring. Michael hit reverse and squealed backwards at 40 MPH as it came rushing at us like a cosmic fullback. Then it lifted as quickly as it fell.

The elements are alive… that I know as fact. They are entities that must be placated and honored. When a storm approaches we give a shot of good whiskey to the Four Winds, asking them to show mercy on our person, our animals, and our small patch of ground. Asking them to accept our offering with kind favor… and often, they accept our submission to their force and glory and spare us their fury.

No, I could never live in Portland where the rain falls like a fine mist.


Footnote: The May 3, 1999 tornado we saw spawned an outbreak which produced at least 66 tornadoes in Oklahoma, making it by far the most prolific tornado outbreak in state history and included the only F-5 tornado ever recorded.
Posted by Catherine Dougherty at 7:46 AM