The Story Behind the Gathering... Funny Stuff 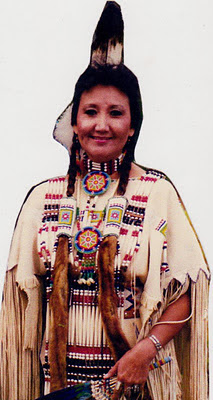 Introduction: I am a semi-klutz. Michael is always 'repairing' something about my person as we go out in public. Smudged mascara, mustard on my chin, the cowlick in the back of my hair parted. I just never quite get it completely together so it has been his personal mission to make me presentable for the last thirty odd years.

As we entered the camp ground at the Gathering of Nations, I noticed that in addition to the familiar Cheyenne and Arapaho tribal members there were representatives of many Native American tribes I did not know. The regalia is quite different from tribe to tribe so various tribes may be identified by their clothing and bead work, shawls and embroidery, porcupine quills and feathers. The intimidating and traditional Sioux from North Dakota, the Grovan of South Dakota, the Winnipeg from Canada, the austere Pawnee of eastern Oklahoma as well as many other tribes were all gathered there. Since this was not an event for tourists, I was rather intimidated and hoped to blend in as inconspicuously as possible, which is no easy feat since I am so blond. Not particularly dressed for festivities, I moved to a group I knew well and sat down to enjoy the dances. The little girls in their waving shawls imitating butterflies, the men portraying the stampede of the buffalo and the flight of eagle, the women whose feet caressed Mother Earth… all beautiful and exciting.

As I had stood to go, I had accidentally stepped on one of my trademark high top Converse shoe strings untying it; unbeknownst to me it was left to dangle and dance with each step I took. With abject horror Michael noticed immediately and watched as the shoe string whipped back and forth, back and forth with each successive step. Later he confessed that he prayed "Please God, don't let her fall, please don't let her fall" as a mantra hundreds of times..one prayer with each of my foot steps.

Michael appeared miraculously and calm.. he smiled and nodded to everyone, gently took my arm, pulled me aside and whispered in my ear….. "For the love of God, tie your damn shoe string!"
Posted by Catherine Dougherty at 5:59 PM