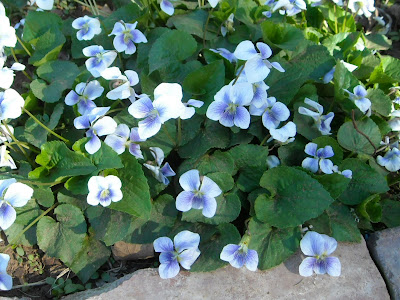 The arrival of Spring this year has been remarkable for never have so many early flowers, trees, and shrubs bloomed at the same time. Apparently the high temperatures have forced the usually staggered-paced blooming to appear in tandem. Consequently the sights and scents are truly spectacular and one must marvel at the beauty of the surrounding countryside. The Redbuds are providing a stunning display.

The drought is another matter entirely and has reached epic proportions, breaking all state records. As our neighbors on either coast and in between are experiencing flooding and even snowfall, we seem stuck in an unrelenting weather pattern that has the rains falling just to our east. The wind is a force unto itself with continuous forty to sixty MPH gusts for over two weeks now. With no significant rain since October and the wind storms drying the garden to the bone, it is important to begin watering. The urge to live is paramount in early spring, but everything needs a bit of moisture to survive the weekly onslaught of the wind. Since I have a rather vivid imagination, I often imagine dry flowers as horseless cowboys lost and wandering in a desert. Picture endless sand under a blazing hot sky, distant mirages swimming... trapped and gasping for a drink of water. Think Hildago... only with roots instead of boots, poor things. And a flower bravely trying to live in a crack of concrete on a busy city sidewalk can break my heart.

On any walk through the woodlands, one sees sweet violets peeking out among the dry leaves. Often called Johnny-Jump-Ups for this habit, they are among the first to arrive at the garden party and that precious little face is always welcomed. Appearing in a myriad of colors, the violet is native to our hemisphere and appears all over the world with over 500 species. The pansy, viola, and violet are all close cousins and among the most popular bedding plants.

As with most plants, there is a colorful mythological history surrounding the violet. According to Greek legend, Zeus who was King of the gods, had taken a fancy to a nymph named Io. Infidelity is certainly nothing new and Zeus was behaving badly in this instance. He attempted to hide his mistress from his wife Hera by changing her into a white cow. Needless to say Io was unimpressed with this change and complained bitterly over the taste and texture of the coarse grass. As she wept sad cow tears, Zeus changed them into dainty, sweet-smelling violets that only she was permitted to eat.

The Roman myth involves Venus, the goddess of love, who was always cross with mortal women. Apparently she fell into a jealous rage when foolish Cupid judged some mortal ladies more beautiful than she. In revenge, Venus swooped down and beat the poor maidens until they became blue before turning them into violets, thus eliminating the competition.

Napoleon was a devout fan of the violet and when he married Josephine she wore them in her hair. On every wedding anniversary he sent her a bouquet and before leaving for exile he visited her tomb where he picked woodland violets. Following his death, these violets were found in a locket he wore around his neck.

Symbolically, dreaming of violets is a promise of advancement in life and it is claimed a garland worn about the head prevents dizziness. They are considered a good luck gift to a woman but if violets bloom in autumn, it is said epidemics will follow within the year.

To pick the flowers, follow the short stem to the bottom and pinch between thumb and forefinger, find a short sweet vase, and enjoy…they last a week and smell delightful!
Posted by Catherine Dougherty at 11:11 AM