It was May of 1990 when I found a lone duck egg covered in dust and straw on the floor of the chicken house. Needless to say it had been abandoned, shoved under the nest boxes, scratched about by the chickens, and it was exceedingly cold. Always the optimist, I decided to give a try hatching it so I found a high sided basket, lined it with a soft towel, and put my egg under a desk light on the kitchen counter. I dutifully turned it, checked the thermometer… and all ten of the family members waited. While we waited, we researched everything possible about hatching a duckling. It seems that ducklings are incredibly good at imprinting, meaning they will instantly bond with the first living thing they see, so the whole family spent the next 28 days peering in the basket, eagerly anticipating the arrival of our hatchling. And Ducky arrived right on schedule, bright eyed and beautiful.

I helped pick the last bits of shell from her pin feathers and then fluffed and warmed her with my hairdryer before putting her back to bed to rest. She had seen the entire family and true to the theory of imprinting, from the moment of her birth, acted as though she was person. She lived in a box and was constantly handled by everyone until she was old enough to go outside when the kids went out to play. She followed them everywhere, played in the sandbox, went to the creek to paddle around as they caught crawdads, ‘helped’ in the gardens and was eventually transferred to a steel reinforced night-time cage.

The twins were almost 14 that year, too young to date and old enough to baby sit and allow Michael and I our first evenings ‘out’ in decades. Since we didn’t watch much TV except for the news and weather, as an incentive I would buy a half gallon of ice cream and let everyone pile into my bed for an evening of tv, snacks, and fun. Of course, Ducky watched tv with them… she had a rubber mat she sat on in case of an accident, and was only put to bed outside after the younger kids had drifted off.

She grew and thrived... in fact her presence was a constant. Her quacks indicated happiness or anger, joy at the discovery of a tasty grub, and she even announced the arrival of guests. She followed behind the tiller for spring and fall plantings, pouncing on overturned worms; she followed behind at garden harvest as well, happily quacking as bits of produce were tossed her way. She sat under Marshall’s arm as he and Dolan watched for tornados, she dove in the pond to bedevil the fish, and she accompanied us on the ‘Great Chicken Release’ in the top field... and she was grateful to be going home. The dogs gave her deference, the cats were terrified of her temper, and the chickens were most certainly beneath her. She was very much in love with Marshall and often, in a tiff of feminine jealousy, she would lower herself and in a sudden rush nip Lize or I if we were spending too much time with him. He put her up each evening and would have her ‘fly’ to her cage, wings flapping as he held her body and ran with her; she loved the game. It was an outrageously simple, happy, and joyful time in our lives, and she was part of it.

As in all tales there is a bittersweet sadness that occurred as well. The children grew up and two by two left home until there was no one left here but Michael and I, the dogs... and Ducky. Since she had been most in love with Marshall, when he first moved to the cabin and then to Weatherford, she became rather despondent even though he came by to get her up and put her to bed. Her loss was mine as well so eventually we became friends, puttering about the rather empty gardens together... two mature ladies who enjoyed each other’s company. 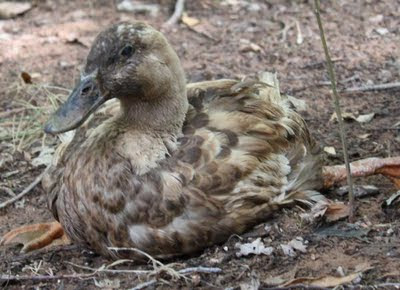 I really had no idea how much she meant to me until suddenly she was very old. By age eighteen one of her little webbed feet had a broken toe, she had arthritis in her legs, her feathers had begun to look rather lack luster, and she could no longer get out of the pond without help. As she exited her cage one crisp Fall morning, she collapsed and could not get up. As she struggled for a footing, attempting to lift herself with her bill, I picked her up and noted she was light as a feather, her bottom feathers were wet and cold, and her breastbone protruded. It was obvious she had not groomed herself in days so not only was she cold and starving, she was too addled to even complain! I was ashamed for not taking care of her myself and was ill prepared to let her go... so I began Duck Rehabilitation that gave a certain meaning to both of our lives.

She suddenly she looked very old~

I took her to a warm bath, towel dried her, hair dried her to further warm her, and then fed her some softened dog food. Apparently the trees over her cage had grown and the shade which was a plus in summer, by the cool evenings of October had created a damp, dank, and cold habitat… it was not the proper place for the elderly. We moved her cage to a new (and dry) place, I put love grass hay in it and covered it with heavy clear plastic… it became a sun warmed cozy little house for her to sleep in at night. I got her up every morning and put her in the pond, tossing her puppy chow, which replaced the cracked corn of her younger days. She began to groom herself again, she put on weight, and although she limped when she walked, she managed to follow me and settle nicely to quack to me as I worked.

Through the Summer and Fall of her 19th year, she looked fabulous! The puppy chow seemed to provide the perfect nutrients so her feathers were absolutely beautiful and her mind was sharp. The arthritis in her legs had improved and she quacked as she waddled excitedly to her morning swim in the pond; she dove and dove, spreading her wings, flapping them joyfully. I always helped her out and she spent her day resting and relaxing before I put her to bed by seven. December that year had blizzards and sub-zero temperatures so I put her in a crate on the heated porch and let her in the house for many evening visits. 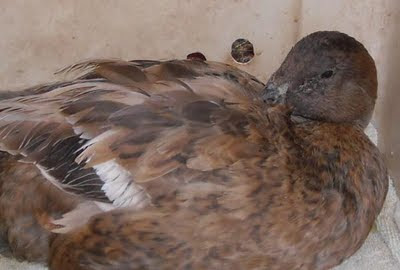 Warm and snug... and happy~

It was on a fine winter day in early January of 2010 that I last saw her. I let her out, gave her food and water and set off to run company errands with Michael. The sun was warm and there was not a single breeze... it was a perfect day. When we got home, John-Michael came in and spoke to Michael in hushed tones. Michael in turn took my arm and told me Ducky had been killed sometime about mid-morning… I was not to look at her but we would have a funeral after lunch. I was devastated! How, why? I had seen the hawk in the Cottonwood for several days and thought he was hunting mice but that was not the case... he was hunting Ducky. The unthinkable had happened and I consoled myself with the fact he hit her at 40 MPH, killing her instantly before devouring her. As my father had often said, “Nature in the raw is seldom mild” and for my darling Ducky to have passed over in this manner was too bizarre, too brutal to imagine! All of the guys and Michael were visibly shaken and disturbed and forbid Marshall and I to look at her. We buried her under the lilacs and I must sat it was incredibly sad to watch grown men wipe their eyes as they said goodbye to their last childhood friend.

I missed her terribly. Possibly the habit of getting her up, taking her to the pond, checking on her, and putting her to bed had so filled my day that there was now a viable void that could not be filled. Then on Father’s Day the twins arrived with Michael’s gift… five young adult Guineas!

Everyone who knows Guineas, knows they are highly nervous freakers, so we put them in the old chicken house for a week to acclimate so they would not disappear into the woods and get lost or killed. Their job would be to scout the garden for bugs… to organically control them. After a week, we allowed two out on the first day, three the second day, and finally all five were released to patrol the gardens. They were fantastic, putting themselves to bed in their original cage each evening all by themselves; we only needed to close the door behind them until morning to protect our little army. And all went well for a little over a month…

Well, naturally the former silence of the garden was interrupted by this small flock of fowl, so the local Bobcat took notice and decided that supper would be far easier than he had imagined. One by one, they disappeared… I would only find feathers. After several weeks, there was only one small, frightened Guinea left… Jenny alone had survived. She began following me everywhere, sitting a few feet from where I worked… perhaps for assurance she was safe. She then became friends with Rajah, and together they roost in the Black Walnut each evening. (He has fallen in love with her and is doing his lovely mating dance for her several times a day… she is unimpressed.) She comes when I call her, notifies me when unannounced guests arrive, and is an extremely pleasant, dutiful, and charming friend. 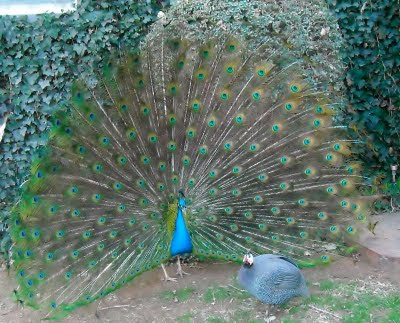 I have lived long enough to know that when something dear is lost, something else will come as a compensation... if the heart is open to it. It is with this thought that I have accepted Jenny’s friendship. And is it possible that she is an incarnation of Ducky? She certainly seems to know the place in a familiar manner... and she likes me a lot. 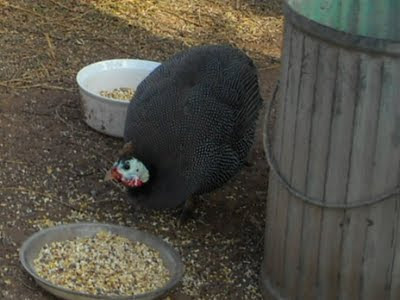 *I had hoped Ducky would break the oldest duck record; a Muskovy lived to be 25~
Posted by Catherine Dougherty at 4:29 PM