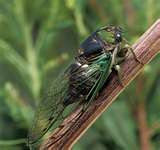 This fellow was introduced to Julia yesterday... she was fascinated!


The magical Cicadas have arrived early and their melodic song foretells of temperatures over ninety degrees for the day. There are 2,500 species of Cicadas and they exist on every Continent except Antarctica. Their name is a direct derivation of the Latin cicada, meaning "buzzer" and their remarkable song is actually produced by the males calling to the ladies. Yesterday evening listening to the songs was a delightful concert and one could hear the differences in the singers. Several sang decidedly distinct with longer and more masculine compositions than the others; one may assume they were the ‘rock stars’ of the evening, drawing throngs of female fans.

For their song, the Cicada is a favorite by universal standards.
There is amazing folklore surrounding this marvelous insect. Jean de La Fontaine (1621-1695) wrote a series of famous fables for the pleasure of the court and one was about the Cicada. Much like Aesop’s ‘Grasshopper and the Ant’, the Cicada is gadding about as the ants work, which is much to his dismay as winter arrives and he does not survive. The Cicada is portrayed in Japanese literature, and Japanese Haiku poetry. More significantly, the Chinese considered the Cicada of import even using the phrase ‘shed off the golden cicada skin’ as an example of a strategic tactic to avoid enemies. Mentioned as one of the Thirty-Six Stratagems used by generals, the Cicada leaves the shell behind to deceive enemies as the body itself escapes danger. The Chinese novel 'Journey to the West' (published 1590) is one of China’s four great classical novels. It has remained popular for centuries possibly due to it’s interesting story line of adventure, transformation, and symbolism. In it one of the journeying characters, the Priest of Tang, is named the Golden Cicada with the shedding of the skins symbolic of stages of transformation as he evolves to enlightenment. 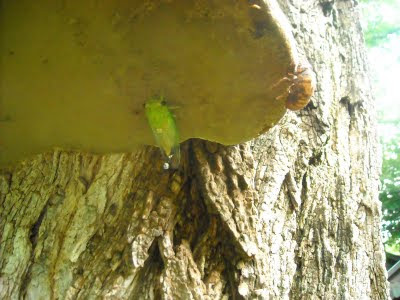 As one listens to the concerts...picking out the rock stars, as one recalls finding the shells as a child... and storing the collection in a box under the bed, as one marvels at an insect that can foretell the temperature... it is indeed awe-inspiring that we are able to sit back and rejoice in what the Master Plan has provided as entertainment in our own back yards.

Cicada Princess, in production now, will be a 'must have' video...
Posted by Catherine Dougherty at 6:56 AM