As summer days continue, the heat we are we experiencing is breaking all state records. And I have noted the weathermen are slowly changing their attitude about reporting the bad news; recently they seem somewhat excited we are breaking all former records. We broke the 1947 record for rainfall in June and July of 2007... many young people had never seen such rain. The weather patterns will change so we must simply keep our gardens alive and wait for another year.

The lovely Mimosa has begun to bloom. As the sweet scent of their flowers fills the air, we can enjoy both the fragrance and the gentle shade provided by their fern-like canopy. The Mimosa was introduced to the United States as an ornamental specimen in 1785 by Filippo Degli Albizzia, a Florentine nobleman. Arriving from Asia, it is also referred to as the Silk Tree for the texture of its flowers. The flowers appear in early summer and have long threadlike pink stamens which are white at the base. They bloom from June through July as stunning pink powder-puffs which drip with sweet nectar. Covering the trees, these blossoms attract hummingbirds, honeybees, and butterflies. 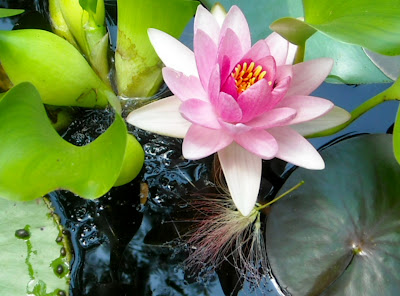 Mimosa bloom in the lily pond~

As with almost every plant and tree on the planet, the Mimosa has medicinal properties as well. The bark is a bitter and an astringent containing compounds which are used to shrink inflamed tissues. They are also used to relieve pain, and contain a sedative which was once used to treat insomnia or anxiety. They increase blood circulation and thus treat heart palpations, and also act as a diuretic.

The lovely flowers were used to relieve a constrained liver and acted as an antitoxin providing a cleansing effect on the body. They have a sedative affect and were used for symptoms of anxiety, insomnia, irritability, and poor memory. The concoctions made from flowers also relieved pressure in the chest and gastric pain. Apparently the spectacular Mimosa was a cure-all for many ailments and it is truly a loss that the ‘recipes’ for its many uses have been lost over time.

This species of tree likes it hot and dry and thrives in the southern regions of the United States with relative ease. Used as a staple in front of Victorian homes it grows rapidly, up to three feet a year, and provides a lovely canopy of mottled shade allowing the grass to grow underneath the branches. With its stunning flowers it is a fantastic addition to the landscape regardless of the fact it is considered a chore to clean up after lest it become invasive.

The fruit-like seed pod can produce over two hundred thousand seeds each year. However with the ease of today’s mowers, it is not a chore to simply collect and discard the pods during regular mowing. Plan on weeding the seedlings from the flower beds and enjoy the beauty of this exquisite tree.
Posted by Catherine Dougherty at 8:51 AM