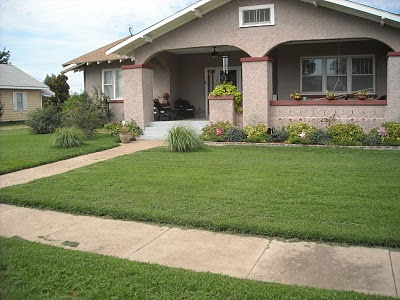 The Bermuda At Marshall and Andrea's House is Amazing~

It is indeed pitiful that temperatures in the low nineties are welcomed as a cool respite. This past summer has rivaled the horrendous summer of 2006 with record breaking heat, excruciating long days of sweltering as well as having no rainfall. Many of us have lost the 'watering battle' and watched as lawns, cherished flowers, expensive shrubs, and established trees expired with the overhead heat. Since temperatures have broken all former records set in the Oklahoma dust bowl, we have had a first-hand glimpse into the past that the ‘old timers’ speak of with resignation.

As we drove along the scorching roadway, mirages could be seen in distant fields, giving the impression of the savannas of Africa. The savannas are large grassy fields with few trees and many natural disturbances which include fires, flooding, and over grazing. The native grass is extremely hardy and the first to grow back quickly following natural disasters This native grass is what we refer to as Bermuda Grass, which arrived in the United States from Africa through the Bermuda Isles in 1751. It is an amazing species of grass which can live through intolerable conditions with surprising survival tactics.

Bermuda is a creeping grass which crawls along the ground both above and below. Under stressful conditions such as we are now experiencing, it has the ability to send its roots up to 59 inches deep, although most of the root mass is a mere 24 inches below the surface. It reproduces through both seeds and rhizomes and will send forth seeds every 90 days until dormant.

All along the roadway, the upper parts of the Bermuda grass has died off, however the grass has kept growing below the surface. Following a rain, almost as a miracle, it will rebound and appear green and lush until frost, once again making the countryside lovely.

The Hindus of India consider it a sacred grass for the ability to rejuvenate itself and the ancient Romans pressed juice from the stems to use as an astringent to stop bleeding. It is highly nutritional as feed for cattle and sheep and was first introduced to the Carolinas as forage in 1760.

By 1927, the ability to rejuvenate following heavy traffic or sports made it the preferred choice for golf courses. In 1930 the hardy, fine-leaved texture of Bermuda was recognized as an advantage for use in lawns, but its intolerance to shade was also noted.

With its ability to spread quickly and its natural resistance to herbicides, Bermuda grass has so adapted to the Western landscape that it is often considered a nuisance, however it has kept millions of acres of farmland from eroding. If you have a sunny spot in the lawn and want a stand of Bermuda, whisper you are planning a garden… it will cover the spot in a week!

*It was perfect for our regulation Badmitton Court!
Posted by Catherine Dougherty at 6:31 AM