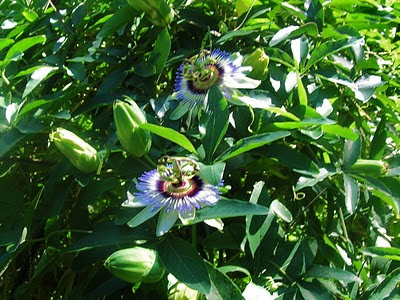 This Friday the Northern hemisphere will celebrate the arrival of Fall and most gardeners are grateful to say goodbye to the past summer. The Equinox occurs as the Sun moves to the South and for a brief moment in time, the world is perfectly balanced between day and night. The trees are beginning to thin and the Sun has assumed a brilliance which makes the world appear polished and dazzling. Perhaps it is because school has resumed, but there seems a quietude, a calmness after the frantic rush of summer and the mornings are finally crisp!

Many gardeners are enjoying the blooms on their Passion Vines now. With over 400 species from which to choose, this genus is prized for its extraordinary large and showy flowers. The flowers are characterized by an intricate center which contains both sexes, making it unusually complete unto itself. In other words, it does not require pollination from a separate plant to reproduce.

The Passion Vine is a member of the family of Passiflorales of which herbs, shrubs, trees as well as the vines are all members. The papaya is among the most famous of the fruits, appearing on a tree which resembles a palm. A cousin of the large leafed and highly cultivated Passion Vine grows rampant in the southern states, although its leaves and flowers are much smaller. Called the Maypop, this sweet wild vine climbs over trees, fences and stone walls in wild abandon and produces lovely, fragrant little flower only the size of a small chrysanthemum.

The plant was discovered in Latin America in the 1500’s by Roman Catholic priests. They named the plant for the Passion of Jesus Christ for they believed parts of the flowers symbolized the features of Christ’s suffering and death (the Passion). The flower’s five petals and five petal-like sepals represented the 10 apostles who remained faithful to Jesus. The circle of hair-like rays raised above the petals was said to resemble the crown of thorns. A gardener once told me that the flower is named thus for its desirable qualities and outstanding beauty; he waits for one to appear with a passion!

The Passion Flowers, those intricate and breathtaking flowers, reach the size of a large tea cup… approximately six inches. The flowers can be almost any color, although the most popular are the pale pink, the deep purple and the white. They are truly exquisite! 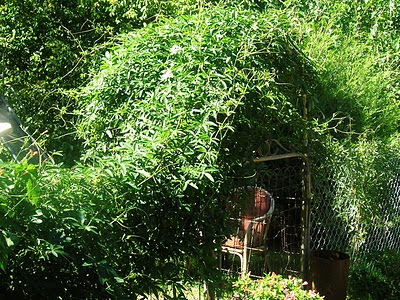 Posted by Catherine Dougherty at 11:54 AM