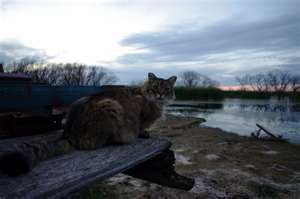 Cats and gardens go hand in hand, for besides being loyal companions, they are valued for catching and dispatching mice, gophers, and moles. However an interesting bit of true trivia concerns cats and how they helped win the Revolutionary War and American freedom.

Several cats distinguished themselves during the Revolutionary War and in the subsequent War of 1812. One of the best known was ‘Cannonball Zeke’, whose real name was Ezekiel. CZ was a large Maine Coon cat that was brought along as a mascot for one of the Maine Militia units. Apparently enjoying the smell of gunpowder and the roar of battle for some odd reason, Zeke was often seen near the front lines. After one close battle it was noticed that Zeke had found refuge in the bore of an old worn out Coehorn Mortar.

The out-gunned, out-manned colonists had long desired a ‘secret weapon’ that could be used to strike fear into the hearts of the ferocious Hessian troops they faced but had found nothing. One inventive old Yankee, noticing Zeke slumbering, hatched an ingenious plan. The mortar had been deemed useless since the worn bore would no longer give accurate fire, plus the casting of an oversized mold would require use of more already precious lead. It was reasoned that Zeke, being a rather overstuffed Maine Coon cat, fit the bore perfectly. Late that afternoon in a fit of desperation, running short of powder and shot, the thin line of farmers stood at a crossroads... use their remaining ammunition until it ran out and they were slaughtered by the fierce Hessians, or take a chance on old Zeke.

The vote was quick; the remaining powder loaded in the old mortar, and Zeke coaxed into the bore. At the moment of desperation during a massive charge by the Hessians, one of the farmers lit the fuse. The rest, as they say, was history. A completely startled Zeke hurtled out of the bore of the mortar and soared screaming through the air over the heads of the startled troops. In a related occupational hazard, Zeke's tail had caught fire from the fuse and glowed brightly in the evening sky. Attempting to dodge all the bayonets below him, Zeke twisted and turned, landing squarely atop a group of British Officers who were directing the attack. The ensuing panic caused pandemonium amongst the troops on the field. Zeke was clawing and shredding everything in sight in his attempt to get away and the officers were flailing and screaming. The frightened troops interpreted the arm waving as a call to retreat and began to scramble toward their rear lines in mass numbers.

Zeke, taking advantage of the confusion, slipped back behind the American lines undetected, and took up his position in the now warm bore of the old mortar. Time and again, when the chips were down, Zeke was called upon to serve once more. His frazzled tail was a common sight at Washington's camp table, where he dined on trout donated to him by grateful soldiers. While affectionately nicknamed "Cannonball Zeke" by the Americans, Ezekiel was termed the ‘Flaming Furball From Hell’ by the British.

Enterprising American Ranger troops, trained to use stealth to sneak close to the enemy encampments, learned to imitate Zeke's high-pitched scream and would take turns sounding off in different directions while surrounding an enemy encampment, throwing the sleeping troops into wild disarray.

So the next time you notice cats pitty-patting around town or sleeping in the garden, remember their importance in winning our freedom.
Posted by Catherine Dougherty at 7:12 AM