Thank God the heat dome finally moved... we have survived! For the first time since the weather events began in May, the weekend surprised us with cool, crisp mornings which were perfect for outdoor coffee and a leisurely walk to see the state of the garden. To say it has been a stressful summer is truly an understatement... it has been devastating.

In viewing the garden it is obvious that many well established shrubs were lost. The combination of months of relentless high temperatures and the blazing sun proved too much for many of them despite Herculean efforts to water. No amount of artificial watering could overcome the cloudless overhead heat. To test to see if there is still life in a leafless apparently dead shrub, break off a small twig and look to see if there is any green within it. If there is a little green and the branch has a slight springy feel to it, the shrub has gone into survival mode and dormancy. It is saving its energy... resting and recovering until spring and time to wake again. Unfortunately the conifers and evergreens that have turned brown do not have the ability to go dormant so they will not return and must be removed and replaced.

However Oklahoman gardeners are such survivors that comfortable daytime temperatures cool evenings will provide collective amnesia and plans for fall gardening will emerge. The wild violets have sent forth tender new leaves signaling it is time to plant the earliest spring bloomers. Their relatives, the precious pansies, have begun arriving in the nurseries and if planted now will survive nicely over the winter.

Originally a common viola growing in fields and hedgerows in England they were cultivated by William Richardson, gardener to Lady Mary Elizabeth Bennett I in the early 1800’s. Despite his efforts their first noted appearance was on the estate of James, Lord Gambier. His gardener, William Thompson, began to cross various viola species with a viola tricolor in an effort to achieve a round flower of overlapping petals. In the late 1830s he found by chance a flower that no longer had narrow nectar guides of dark color on the petals but a broad dark blotch instead; from this pansy came the future ‘flowers with a face’. Released to the public in 1839 with the name "Medora," this pansy and its progeny, including "Victoria", rapidly became popular with gardeners and breeders throughout Europe.

Planting some now will give stressed gardeners a much-needed thrill and the baby pansies will have a head start next spring. With their stunning color options and delightful smiling faces, these cheerful little flowers are always welcome guests at the garden party! 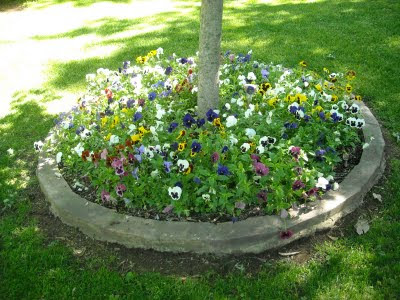 Posted by Catherine Dougherty at 8:54 AM