The Houdon... find of a lifetime 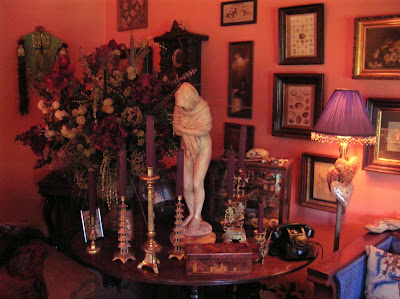 As most of you know I am an avid yard/garage sale person. It is the quest, the deal, the ‘rush’ from getting something that is amazing and a total surprise. The jackpot has always eluded us… until yesterday.

We got started late and didn't really think there was anything we wanted or needed but compulsive people do things by rote so off we went at a little past ten. Besides the nonstop parade of pink plastic baby toys and clothing that should have been sent to the trash bin, there was depressingly little at the first eight sales we attended. Then as we rounded a corner, we spotted a nice home with a well-dressed elderly lady conducting a sale. She was downsizing she explained and getting rid of everything she no longer needed. Michael had made a bee line for something I couldn't see that was tucked behind a chair. 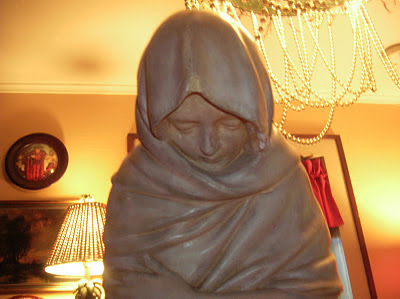 I noted his hand was shaking as he opened his billfold and when I glanced at the statue I almost dropped my teeth... she was gorgeous! He picked her up like she was a child and almost ran to the car, as if the lady would change her mind. He looked at me and mouthed, "Come on, come on“, gesturing frantically.
*It should be noted that I had asked the garage sale gods to send us something fantastic just before we rounded the corner and I thank them from the bottom of my heart!

Michael has always had a thing for statues; as a young boy of about 8 he stole a bust of Shakespeare, several large Angels and St. Michael creating a sort of shrine to them in the woods. He had used his little red wagon to haul them. When someone found the grotto, there were questions about the theft, but no one discovered who had taken them and they were simply returned to the library and churches where they resided. So you see for Michael to have 'found' the statue was thrilling... it was a once in a lifetime gift to himself.

I turned from the front seat to inspect her and noted she was signed and numbered... a good sign. I further noted the lovely detail and her face was exquisite. I called my friend Maria who is a conservator in Dallas, and she was speechless... 'A Houdon, you got a Houdon for $50! Unbelievable!'

Background: Houdon (1741-1838) A French neoclassical sculptor who was very popular during his lifetime doing busts of George Washington, Thomas Jefferson and other important dignitaries of the day. However I do not think our Houdon is from this time frame... the Louvre commissioned 500 statues in about 1850 and I think she is one of those. Her number is 406.

Her official title is 'Chilly Lady' however after looking at her lovely face, I do not feel she is a 'lady', but rather a young girl of about twelve to fourteen years old. And if you are 'chilly', you cover your body, not your face. Therefore, I have concluded she was snatched into some gilded coach, stripped, used, and tossed aside where she covered her head in shame, hoping not to be recognized. In busy Paris of the 1780's this was possibly a not an unusual sight, however something about this young girl moved Houdon enough to immortalize her...

Posted by Catherine Dougherty at 1:44 PM