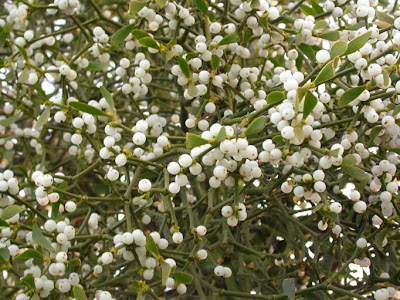 Mistletoe has a long and colorful history including myth and medicinal remedies most originating in Northern Europe, the birth place of this extraordinary plant... it is amazing!

The enigma of Mistletoe easily lends itself to lore. It hangs air born between heaven and earth, has no roots yet bears fruit, and remains green and vibrant during the winter months. It was said to have been revered by the Druids as most holy, especially if it appeared on an Oak which was their most sacred tree. The golden berries of the plant were considered a key linking the heavens and underworld. Cut with a golden sickle on December 23rd (the day of the marriage of the solar and lunar forces), it was not allowed to touch the ground but was caught with a white cloth. Two white bulls were sacrificed for the ritual which ensured fertility, protection from evil, abundance, and harmony. The ritual of kissing under the Mistletoe has its origin in these pagan beliefs.

Shakespeare calls Mistletoe 'the baleful Mistletoe,' an allusion to the legend of Balder. Norse mythology has Baldur, the solar hero child of Frigg and Odin, killed by an arrow made of Mistletoe. As Baldur descended to the Underworld, it was said that he would not return until after doomsday. Then, as the solar god, the light of the heavens, he would usher in an era of peace and light to mankind. His story is long, full of conspiracy and jealousy as the gods and goddesses of old were prone to petty emotions, however the historical power of the plant has remained.

Whatever the reason to include this marvelous plant... a kiss below it, a wish for good luck, or simply a spot of bright green color... it is truly a magical addition to any Christmas decor.

*Thanks to Malcolm Brown for contributing to this article!
Posted by Catherine Dougherty at 6:30 AM