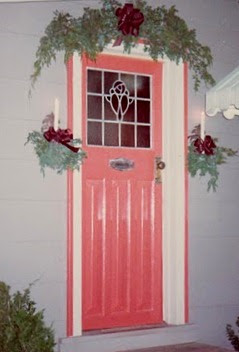 Entrance to the former study circa 1980~

Last January, after consulting the Almanac, I wrote an article about the coming winter and it was correct in predicting the Winter of 2011 would be one for the record books. The Almanac, published since 1792, had noted many signs that indicate the approach of a dreadful winter. One of them was ‘rodents eating their way into the house through doors’. In spite of the fact I am surrounded by fields, this had never been a problem before last December.

I digress:
In the late sixties through the seventies auctions were prevalent and items were inexpensive. It was great entertainment to meet with friends and go shopping for one-of-a-kind items. In 1977 at an auction featuring goods from England I bought my fallow deer horns from Sherwood Forest, a raucous five paneled painting of the (now banned) hunt, an intricate iron bed, and a charming door originally from a row house. The entire lot cost under $75!

The marvelous door, made of sturdy English oak, had a perfect stained glass window and was in pristine condition... and with the traffic at this house it survived amazingly well. It must have been opened and closed at least sixty times a day and has been claw scarred by full-back-sized Mastiffs demanding entrance. Sometime along the way the lead in the glass of the window became loose and eventually had to be replaced by glass. When the little study was replaced by the great room the door became the entrance to the mud room. Only English Oak could have withstood the onslaught, requiring only an occasional layer of paint to refresh it.

Unbelievable! And where is a cat when you need one?

December of 2010:
Enter a new breed of mouse... a monstrous mouse the like of which I have never seen before. I have always had field mice and deer mice surrounding my home, and they seem cute (at a distance) but this new and nasty mouse was an anomaly! It had a sharply pointed face, narrowed glinting eyes, a dull brown coat... and apparently the sharpest teeth on the planet. On a single night in early December one (or a raucous crowd of them) ate a hole in my marvelous back door leaving a pile of wood shavings on the stoop! Naturally a board had to be added to give further life to my door. And naturally there ensued a rush to the hardware store for an assortment of mouse-killing remedies. The Almanac was correct!
Posted by Catherine Dougherty at 6:55 AM