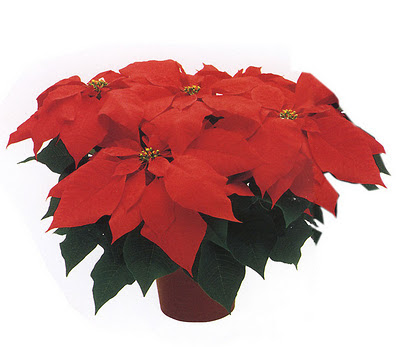 In the 1800’s the holiday flower of choice was the carnation which still graces many arrangements, however today the Poinsettia has come to speak of the holidays as no other. The Poinsettia began as a small Central American shrub and for centuries the Aztecs used them both medicinally and for making red dye. The Poinsettia was first introduced to the United States in 1825 by Joel Robert Poinsett, the first United States ambassador to Mexico who discovered it while hiking. Quite an ambitious gentleman, Mr. Poinsett introduced the American Elm to Mexico and also established the Smithsonian Institution in Washington, D.C.

Contrary to popular belief, Poinsettias are not poisonous if ingested. The rumor began following the death of an army officer's child who ingested a leaf in 1919; the child died soon after of another sudden illness. Researchers at Ohio State University have done extensive tests with mice and rats and found no ill effects and the American Medical Association has confirmed the plant is not poisonous. (Michael's father is a physician and the myth was so extensive that they never had one in their home.) Although not poisonous, Poinsettias are a part of the genus Euphorbia , all of which exude a milky sap when broken and in many species the sap may cause a skin rash.

The Poinsettia we know today is the creation of the Ecke family of German botanists who arrived in America in 1900. Paul Ecke Jr. noted there were few potted plants that bloom in winter so he developed a full and sturdy Poinsettia that would bloom at Christmas. He then solicited editors of women’s magazines and donated his plants to be used in Christmas layouts. He also donated hundreds to be used as the backdrop on television talk shows at Christmas in the 1960’s. The placement of layers of red Poinsettias behind Johnny Carson and Jack Benny was a brilliant marketing ploy and assured the Ecke family lasting leadership in the industry. Today eighty percent of the Poinsettias marketed during the season still come from the Ecke Ranch in Encinitas, California where the generations of the family continue the legacy.

When selecting a Poinsettia look for a plant with dark-green foliage, completely colored bracts, and no sign of wilting or yellowing. Since the plants are sold during December it is important to make sure it is securely wrapped when purchased to prevent exposure to the elements as it is rushed from the store to the car, then the house. Since they are from a hot climate, exposure to cold may prove fatal and cause instant curling of the leaves. When you get your poinsettia home unwrap it and place it in a comfortable sunny location and water whenever the soil feels dry. Enjoy!

~Dedicated to my friend Bruce who can make his rebloom!
Posted by Catherine Dougherty at 3:22 PM