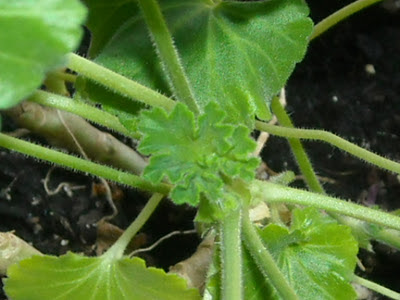 The outdoor Geraniums that are currently being housed were in shock for a bit and many lost leaves and produced lackluster growth with the change of their environment. Spindly stems and miniature buds have made them appear half their former selves. However if one looks closely now, the tiny new leaves that are being called forth appear robust in form and color. So about now, drastically pinch back your plant, removing any small yellowing leaves and old unhealthy growth. In a matter of a few weeks, it will recover and the energy lost in attempting to keep the old growth alive will be transferred to the new in an amazing way! By spring and time to take them to the garden, they will have totally recovered from being a boring houseplant and will be ready to bloom their hearts out for you.
February is often considered the most boring month on the calendar as we wait for full blown spring. It definitely takes Valentine’s Day to make it endurable!

Unfortunately February also brings the pollination of the Red Cedars and they are infamous for the effects they have upon mankind. The female Red Cedar is the culprit and her branches are heavy now with yellow pollen that is caught by every passing breeze and several weeks ago we had 50 mile and hour ’breezes‘.

Red Cedars, a native species with an extremely hearty constitution, have a life expectancy of up to 850 years. Occasional prairies fires once controlled them however with the expansion of urban communities, there are cities and towns where vast stretches of grasslands once existed. Over the years Cedars have become invasive, growing everywhere a bird has eaten then, dropped one of the bluish-purple seeds. An established hardwood tree provides perfect protection, however the Cedar will out grow and overpower it. They are referred to as ‘a pioneer invader’ which means a Cedar is one of the first trees to repopulate cleared, eroded, or damaged soil. And toxins are not a detriment for they actually enjoy carbon dioxide, remaining healthy growing next to a hi-way.

Oklahoma is full of Red Cedars so the heavy load of allergens and pollens will be here each year. The pollen is easily inhaled as it travels on the wind and is the culprit of the condition called hay fever (or allergies) as it may irritate an individual’s throat and nose. This pollen causes much suffering so short of moving it is wise to know the enemy and make a strong effort to learn how to partially protect yourself.

In my research I discovered helpful sites that give informative and helpful insights into fighting the effects of Cedar pollen. The basic concept one should remember is that the more time spent outdoors during an allergy season, the more problems with allergies. On pretty winter days resist the temptation to fling open doors and windows (I do) for fresh air...there is no fresh air in Oklahoma during Cedar season.

Although I am not an advocate of any product, it is helpful to know what to take/look for: For basic relief, take an antihistamine. There are many kinds of antihistamines, most of which do not require a prescription. The antihistamines that have been around for a long time are called first-generation antihistamines. These have been used for many years and are considered very safe and effective. Some of the best-known ones are Benadryl, Demeaned, Chlor-Trimeton and Zirtec-D. The main negative to these antihistamines is that they cause most people to become sleepy, however the effect may be modified if one takes a low dose headache remedy containing caffeine, which combats the drowsiness with no ill effects. A decongestant such as Sudafed opens up the nose, makes breathing easier, and reduces the amount of drainage from the nose. The decongestants tend to be a stimulant for many people, and when they take a combination of antihistamine and decongestant, the decongestant helps to counter the sedating characteristic of the antihistamine.

This too shall pass!
Posted by Catherine Dougherty at 5:14 AM