Peter and the Wolf... a Parable About Prejudice 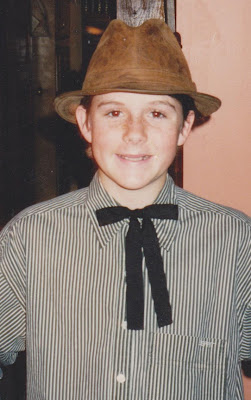 Peter on his way to the dance~

Once upon a time in small rural town, a young boy named Peter lived a quiet life. He was kind and outgoing, with a sense of compassion beyond his years. He was from a large family that encouraged cooperation rather than competition and for this reason, he and his siblings were schooled at home. Since Peter was basically a social creature once he learned to dial, he used the telephone to make new friends. One of his friends was a young girl who had childhood diabetes and often when she was housebound with her illness she and Peter would talk on the phone for hours. They talked about everything children discuss...pets, walks, friends, her school, and plans for summer.

One winter day she breathlessly called to announce there was an upcoming middle school dance and she was allowed to invite a date. Would he go with her? Ah, the frenzy of excitement for neither of these children had ever imagined such a thrilling occasion. They practiced dancing... she with her Mother and Peter with his. She shopped and shopped for her dress; Peter's Mother bought him new pants, a shirt, and a string tie. Peter even ironed his socks before the grand event and as a final touch doffed his grandfather‘s suede hat. Peter’s older brother drove him to town where he was to meet the girl at the dance.

The school board had enacted a rule that any person not attending the school had to be listed on a 'sign up sheet' three days before the dance to be able to attend. The frail girl had carefully studied the rules and had signed Peter’s name on the sheet a full week before the dance. Peter’s mother even sent a copy his birth certificate to avert any problems about his identity. When Peter arrived, nervously carrying her wrist corsage, he could see the girl waiting, smiling and waving to him from within the magic of the tented and transformed gym.

An evil and wicked man was Master of the school. He received full support for his sinful ways from evil and wicked people who admired him for his many moral flaws... flaws they too possessed. As Peter approached, he stood to loom over and look down upon the child... he had been waiting. The wicked man glanced behind him to see the frail girl joyfully smiling and felt a flush of pleasure over what he was about to do.

He picked up the check-in sheet then took a sharpie from his padded pocket. He ran a gnarled finger down the page and drew a thick black mark through Peter’s name, obliterating it. He looked at the child through eyes that narrowed with hate and said, 'I don’t see your name on the list Peter'. Then he smiled and hissed, 'I guess she forgot to sign you up... you can’t come to the dance'. He felt immensely satisfied afterwards and knew how proud his friends would be at Church next Sunday when he ‘shared‘ what he had done.

The frail girl stood in shock as she realized what had happened. She uttered a long inconsolable wail before beginning to weep, falling into the arms of her friends. Peter’s brother took him gently and guided him outside since young Peter was unable to see through his tears.

The children's loss was immediate and young Peter and the girl had been forever changed. And even when the girl’s sweet Mother took them on a ‘pizza date‘ as consolation, they were both sad and silent. Shortly thereafter the frail girl and her mother moved from town, never to return.

Peter grew to manhood... kind, outgoing, and compassionate but he never forgot the wicked man or the people who admire moral flaws.

The dark evil spread and the blessing of rain rarely found its way to the town. Then the water became poisonous, turning to arsenic. The barren fields produced blinding dirt devils and decent people began to move away.

The wicked man prospered by continuing on his path and to this day he and his friends live by the rule of hatred and judgement. They truly believe they are Righteous and will inherit the Earth...
So they have sown so shall they reap. It is the Word.

The End~
Posted by Catherine Dougherty at 8:44 AM