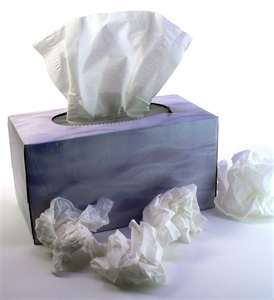 It must be noted that early buds are swelling on the Maples and Elms and with them comes considerable pollen. Without going into intricate scientific explanations, it may be simply stated that the pollen of most trees, shrubs, and grasses is lighter than the pollen of flowers. It may be carried by the wind as high as three miles up and as far as 100 miles from the original plant. Easily inhaled, it is the culprit of the condition called hay fever (or allergies) as it may irritate an individual’s throat and nose.

With our typical breeze often increasing to driving winds, it is impossible to avoid this early pollen. As way of compensation, the pollen on flowers that arrive later in the season is generally much heavier… meaning it does not tend to blow about with such a vengeance. Thus as the season progresses, allergies will ease a bit. However annoying it may be now, it is necessary for the plant reproduction so we must be accommodating… while sneezing our way through spring.
Posted by Catherine Dougherty at 10:52 AM