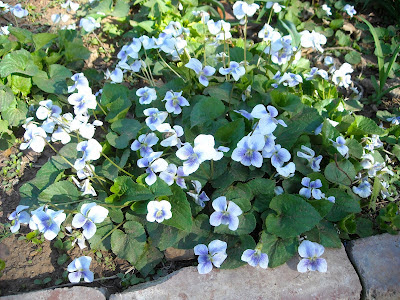 Over the weekend the blessed rains came again and with them Spring arrived in earnest. The early woodland violets have begun to bloom and their joyful faces may be seen peeking out among dry leaves. They are native to our hemisphere however the violet has over 500 species that appear world wide. The colorful pansy and viola are close cousins and among the most popular bedding plants.

As with most plants, a colorful mythological history surrounds the violet. According to Greek legend the King of the gods, Zeus, had taken a fancy to a lovely nymph. Infidelity is certainly nothing new and Zeus was behaving badly in this instance so he attempted to hide his mistress from his wife by changing her into a white cow. Needless to say the nymph was unimpressed with this change and complained bitterly over the taste and texture of the coarse grass. As she wept sad cow tears, Zeus changed them into dainty, sweet-smelling violets that only she was permitted to eat.

The Roman myth involves Venus, the goddess of love, who was always cross with mortal women. Apparently she fell into a jealous rage when foolish Cupid judged some mortal ladies more beautiful than she; in revenge she swooped down and beat the poor maidens until they became blue before transforming them into violets.

Since medieval times violets have been crystallized and appeared as an edible garnish. The early Church gave meaning to the heart shaped leaves which were said to represent the Virgin Mary’s modesty and loyalty. Symbolically, dreaming of violets is a promise of advancement in life and it is claimed a garland worn about the head prevents dizziness. They are considered a good luck gift to a woman but if violets bloom in autumn, it is said epidemics will follow within the year.

Napoleon was a devout fan of the violet and when he married Josephine she wore them in her hair. On every wedding anniversary he sent her a bouquet and before leaving for exile he visited her tomb where he picked woodland violets. Following his death, these violets were found in a locket he wore around his neck.

To pick the flowers follow the short stem to the bottom and pinch between thumb and forefinger then place them in a small vase. Add water as they 'drink' it and they will last a week or more. It is amazing that such a small flower can fill the room with so much sweet scent.
Posted by Catherine Dougherty at 8:52 AM