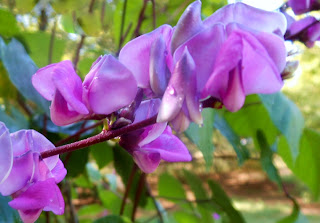 Every year it is nice to plant something entirely new. Since gardeners tend to have a generous heart, often all that is necessary is to stop and admire a garden and one will be offered a cutting, an on-the-spot dug batch, or a bag of seeds. Such was my pleasure several summer's ago as I was waiting in the car at Auto Supply I noticed a gorgeous vine twining about a fence adjacent to the alley. The vine had lovely leaves which were veined with deep purple and the exquisite pink and lavender flowers crawling along the tendrils resembled tiny orchids. The electric purple bean pods were scattered throughout the mass of leaves and flowers making the entirety a stunning display. Thus was my introduction to Hyacinth Beans. The gardener gave me an overly generous bag of seeds which are absolutely adorable themselves. They are black, brown or speckled with a half circle of white at the joint making them smile! 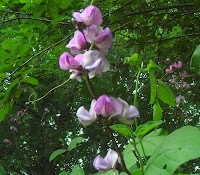 The plants come up quickly in the garden, have a high tolerance to heat, and will travel over twenty feet in a single season. Planted on the fence, the light pole, or anywhere one desires a charming screen, this vine is truly a remarkable joy. Although considered a perennial in some climates, in the Midwest they are an annual, but considering their ease of growing, they make a welcome addition to the garden. Collect the seeds once they have dried on the vine before they receive a  frost.... there are usually six to eight in each pod. Store them in an airtight plastic bag and remember to share.

This year mine were planted on July 30th below the trellis we had been given for our anniversary. Within a week they were up and twenty days later began blooming profusely. For anyone wanting some…I have seeds! 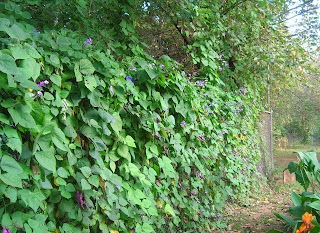 *Planted late June a few years ago, they covered my six foot chain link fence by the end of July and bloomed until frost.
Posted by Catherine Dougherty at 3:10 PM