How to Cook a Perfect Turkey 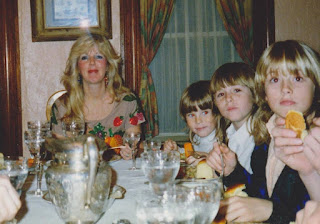 Regardless of poundage of the bird, it is possible to cook a perfect turkey everytime with this simple trick: cook it in a brown paper sack. I was away from my family and living in a little third floor walk-up two blocks from Long Island Sound in New London Connecticut in 1968. The grande dame of New London society, Libby Frost, had taken me under her wing and was the most perfect role model and friend my family could have wished for. As Thanksgiving approached she taught me how to cook a perfect turkey and to date I have cooked over 40 of them at Thanksgiving, another 40 or so for Christmas dinners.


Thaw the bird for two days in the frig then take it to the sink and throughly wash it. Remove the various innards (the gizzards, liver, and neck) from under the loose flap of skin where the head used to be. Set them aside to slow boil in about a cup and a half of water as you will need both of them for gravy.  Put on an iron skillet of bacon... a full package. Cook, drain and save the grease. Break it into bits.

Pat your bird dry with a paper towel and set him aside to completely drain with the rounded side up. Put some foil over the tips of the wings so they will not burn during baking. 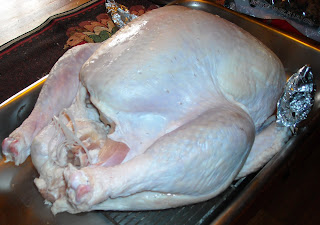 Make your stuffing while your bird 'rests'; I like traditional sage Southern dressing like my Mother always made. Finely chop a large yellow onion, a whole stalk of celery, and add three cups of dried bread crumbs. (If you buy them, don't get the seasoned package as it will ruin the true flavors of the ingredients.... I usually lightly toast leftover heels in the oven.) 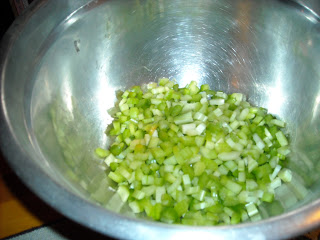 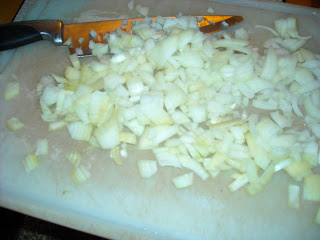 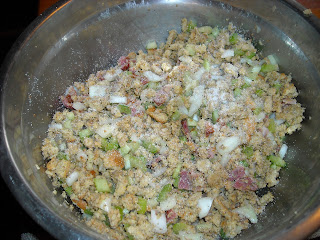 Flip all the ingredients together, adding about a quarter cup of sage, the bacon as bits, and salt and pepper to taste. Add about a cup of chicken stock and the bacon drippings. Set aside...


Now take your bird and cover him with a layer of Crisco. Once he is completley covered put your stuffing in the cavity press it firmly and then cover it with the tail (or Pope's nose) and the loose flap of skin. Tuck the legs together, putting them securely under the skin left there.

Begin cutting your paper sack to completely cover the bird. I usually cook a 22 pound turkey so we have a little left for sandwiches later... it takes creativity and two sacks. 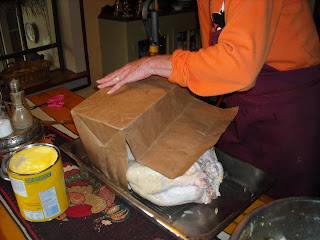 Cut to cover your turkey~ 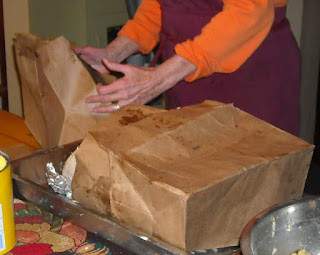 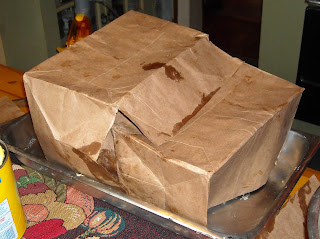 Cook at 325 for 15 minutes a pound. The Crisco makes the turkey a golden brown and it will cook perfectly every time with no basting or hassle. After the allotted time, remove the bird and immediately remove the sack(s). Allow the bird to 'rest' for twenty minutes or so before lifting it from the pan. Once it has 'set' move it to a large platter and surround it with bits of parsley or other garnishes of your choice.
Begin your Gravy!
Take 1/2 cup of the drippings from the turkey pan and place them in a large frying pan. If your family enjoys the liver and heart that you previously boiled, cut them in small pieces and add them. Allow the ingredients to heat to a gentle boil and add two cups of cooked stock and the following cornstarch mixture. Flour as a thickener tends to make lumps... cornstarch is better.
To make the cornstarch mixture wisk 1/4 cup cornstarch to 2 cups of cooled broth. (If the broth is hot, the cornstarch will not dissolve and cook properly.) Add this mixture to the heated drippings in the pan and continue to wisk as the gravy thickens... add salt to taste and you're ready~
You've done it!!
HAPPY THANKSGIVING!
Posted by Catherine Dougherty at 8:17 AM