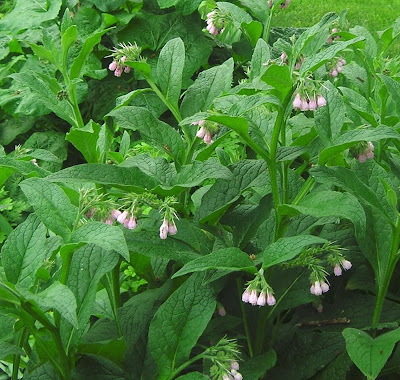 An often overlooked plant that thrives in partial shade is Comfrey. Besides sporting delicate cascading pink blooms, the delightfully prickly deep green foliage make this addition striking beyond compare. Easily grown if root stock is taken from a Mother plant, this steadfast guest in the garden will last twenty years or more faithfully providing a lovely focal point. Growing to the size of a large bushel basket and ever-blooming if cut back during the season, it is a welcome addition to the garden party. Although it is said that it may be planted in full sun, in fact it is a true shade lover that will thrive in a bed located under a tree.

Comfrey has been cultivated in the East since 400 BC as a healing herb. The word ‘comfrey’ is derived from the Latin meaning ‘grow together’ which reflects the early use of this lovely plant to aid in knitting broken bones. Both Greeks and Romans used it to stop heavy bleeding, treat bronchial problems, and heal wounds. Poultices were made for external wounds and a tea was consumed for internal ailments.

This handsome member of the Borge family, has also been used medicinally throughout the British Isles for centuries with the common name of Knitbone or Boneset. A tea made from boiling the root in water or wine was used for all pulmonary complaints and could stop bleeding of the lungs. Taken every two hours the concoction was said to relieve hemorrhoids as well. The pounded roots applied to fresh wounds promoted healing almost instantly making Comfrey a necessary addition to every garden. 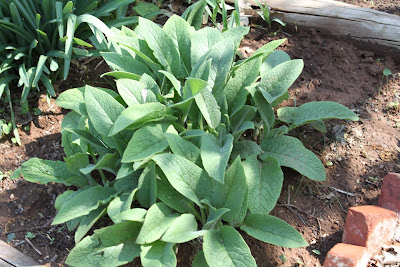 Early in the Spring

Often when reading about plants, it is difficult to imagine exactly how they were made into medicine. Coldpepper, the famed 18th century botanist, wrote of Comfrey, that it was “so powerful to consolidate and knit together that if they (roots) be boiled together with dissevered pieces of flesh in a pot, they will join them together”. Further, he gave the recipe for making a poultice as follows, “The fresh roots of Comfrey beaten small and spread upon leather laid on any place troubled by gout presently gives ease. Applied in the same manner eases pain to joints, heals running ulcers, gangrenes, mortifications, for which hath often (through) experience been found helpful”. Although I am unsure what mortification is, it sounds quite serious and this little plant took care of it.

I have used it medicinally for years and last fall made a series of poultices for my son's big toe that he had broken in two places. I picked fresh leaves and packed them in a food processor with a bit of water and a little peanut oil to keep them tight. Once blended, I wrapped the concoction in small pieces of sheeting, making about thirty small poultices in all. He put the Comfrey on his toe for several hours twice a day and X-Rays before and after (to the doctor's amazement) showed it had healed within two weeks.

He had another accident and broke his nose last week. We dug the root and smashed it up a bit before applying it and by the second day of use, his nose no longer hurt to the touch. The root contains a white slimy goo, much like the aloe, and it turns the same dark color natural aloe does when its root bound state has been altered. Comfrey will also cure a bicycle-skinned knee in several days time.

With the emergence of ‘green’ as the way of the future and pharmaceuticals becoming unaffordable, perhaps traditional use of some of these valuable plants as medicine may reemerge. A trip to the garden seems far more pleasant than a trip to the doctor. 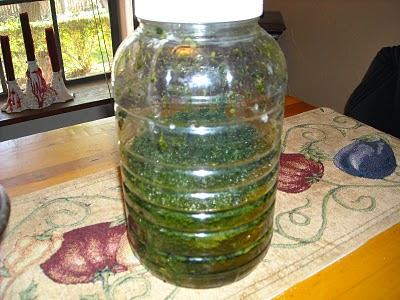 The 'concoction' lasts for months if refrigerated~
Posted by Catherine Dougherty at 12:59 PM