The Star of Bethlehem 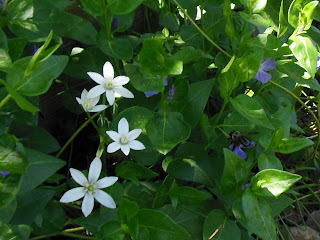 Lush is the word to describe the garden this year for the rains have ushered in a delightful spring! The tender new growth and emerging leaves on the trees resemble emerald diamonds, sparkling with freshness in the dew filled morning sunshine.

The lovely Star of Bethlehem has arrived at the garden party and may be seen peeking out here and there in places she was never invited. This darling flower has a habit of traveling and the tiny bulbs will grow without fuss wherever they choose. The vivid green reed-like foliage appears while it is still winter and falls away just as the clusters of precious flowers begin to appear from the center. Throughout the months of April and May the small white flowers, which dutifully close each evening, will faithfully grow taller each day and will last up to two weeks when cut. The star-like shape of the flower gave it Bibical associations to the star over Bethlehem at the birth of Christ.

These plants are fantastic in both name and function. In the Middle East these flowers have use in the culinary world, for although they are considered toxic to animals, most species are safe for human consumption. The bulbs are frequently dried and ground while the flowers are baked into uniquely-flavored breads.

In the 1930’s the scientist Dr. Edward Bach, an English bacteriologist, believed that dew found on flower petals retained healing properties and practiced using the natural oils produced by the flowers, bark, stems, leaves, and roots of a plant to enhance psychological and physical well-being. He created a Rescue Remedy to treat the stress, anxiety, and panic attacks caused by unforeseen emergencies. It is a combination which contains an equal parts of Rock Rose, Impatients, Clematis, Cherry Plum,  andStar of Bethlehem, and is still popular today. He believed the Star of Bethlehem alone had the ability to cure shock.


In Victorian times the language of flowers became popular and the Star of Bethlehem was often used in weddings as they were considered a symbol of purity. They were given on romantic occasions symbolizing hope for a new life, or the continuation of happiness and love. In addition to purity and hope, these flowers were thought to be an expression of atonement and reconciliation, and were often given by one asking for the recipient to ‘forgive‘. The Victorians were quite creative with their use of flowers. 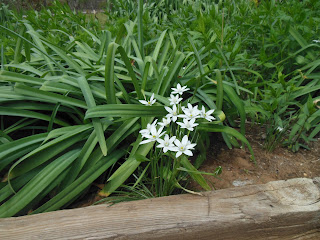 Posted by Catherine Dougherty at 1:41 PM