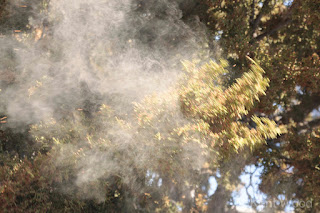 Last week National Public Radio news reported an incident which occurred at a Western Oklahoma school involving students on a playground suddenly having difficulty breathing. They were of various ages, playing totally different outdoor games so there was no interconnection between them. They began gasping, several collapsed, while others were transported to the hospital on oxygen. After initial investigation by authorities, environmental scientists were called in for an official opinion.


The incident was caused due to a strong wind blowing over an adjacent wheat field causing wheat pollen to be blown to the playground. Experts hurried to explain it was the new and improved 'super pollen'... the wind had provided a pollen tsunami. In 2011 scientific articles on the effects of Global Warming were published by experts who predicted pollen will increase to the status of 'super' in the coming years... and thus it has.


In spite of many gardeners (myself included) who resisted the notion of genetically modified seeds with the dramatic increase of world population it has been necessary to improve production of crops lest millions of people starve. However the natural evolution of our scientific efforts to boost production has been that crops are two steps ahead of us. It takes but six generations for wheat to adapt and produce seeds which are unaffected by roundup, a chemical herbicide which should ordinarily kill them. For self preservation, plants have super activated their 'immune system' and are producing pollen which will ensure their survival... this pollen is far more potent than the pollen of yesteryear.


Additionally, experts conclude increased emissions of carbon dioxide released into the atmosphere by fuel propelled autos, airplanes, and large machinery have aided in plant adaptation. Since plants and grasses utilize carbon dioxide in the production of their food, the theory is that plants and grasses are now receiving the equivalent of daily doses of fertilizer. Gardeners who supply fertilizer in regular intervals know their plant life is rejuvenated by such applications so the theory is not off base.


Government research on Ragweed, the major culprit of allergens in the fall, indicate it produces more pollen and larger pollen as the growing season lengthens and the carbon dioxide levels rise. According to the US Agriculture Research Service, Ragweed already produces 131% more pollen now as opposed to a hundred years ago. Their projection was that by 2050 the percentage number would rise to an alarming 320% however this research has been modified and this percentage number will be reached by 2017.


Research also indicates trees and grasses, the prime sources of allergy misery in the spring and summer, also are in the process of becoming super pollinators.
Information is best utilized to protect our young and elderly who are our most vulnerable... perhaps stay inside during one of our new 'super wind' storms.
Photo: Blowing pollen
Posted by Catherine Dougherty at 12:17 PM