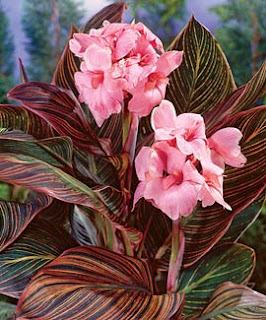 The fantastic Cannas have begun their foliage show this year. The spectacular foliage is special for its showy leaves, which arrive at the garden party to provide visual interest before blooming begins. A faithful flower, they will bloom from spring until early frost if spent flowers are removed to prevent formation of seed pods.

The Canna has been the subject of hot botanical debate for years with each continent hoping to take credit for its origin. However it belongs to us alone as it has never been unearthed during archaeological excavations anywhere but on our North American continent. Mentioned in exploration documents in 1576, it was formally introduced to in 1856 where it was named for the Celtic word for cane or reed.

Rather ominously, on our continent the Canna was once called 'Indian Shot' as their small, hard, round seeds resembled the home-made lead shot used in shotguns prior to the twentieth century. The unusual seeds were also used in making jewelry and many attractive antique necklaces contain them, either dyed or natural. Because of this impenetrable seed, the Canna is the only plant in which hibernation of seed is known to occur.

Typically in hot red, orange, yellow, or combinations of the three, hybrids have produced a dazzling array of colors and heights for this exotic and exquisite species. They are natural pollinators and attract both hummingbirds and butterflies making them a welcome addition to every garden. An additional plus is the fact if they are left undisturbed they will bloom faithfully for many carefree years.

Of note is the underground rhizome which contains the largest starch particles of any plant, allowing its agricultural use. Its leaves may be made into paper, its stem fiber is equivalent to jute, its seed provides a lovely natural purple dye, and its flowers have also been fermented to produce alcohol. Smoke from its burning leaves is said to be an insecticidal, and with the Zika virus arriving in , perhaps sacrificing a few leaves to stave off mosquitoes would be a worthwhile endeavor.

Horn Canna Farm, located on 120 acres outside of Carnegie in boasts the largest collection of Cannas in the world. Founded by Neil and Louise Horn in 1928, it is truly remarkable and will be hosting its 30th Annual Canna Festival on . The gardens will be open for free visitation with over a million breathtaking Cannas in full bloom. I highly recommend a tour of the gardens…remember to mark your calendars for it is indeed fabulous.

Posted by Catherine Dougherty at 8:03 AM