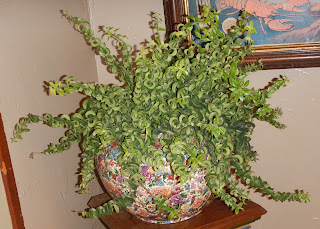 Ferns are possibly the oldest plants known to Earth, with the first of this family appearing eons ago in water settings. It took 60 million years for them to leave water to appear in marshlands and many more eons for them begin life standing upright on land. They were on land long before the dinosaurs, making them unbelievably ancient and by the time trees began to flourish, ferns already occupied the forest floor.


Ferns are specialists in adapting to marginal habitats, often succeeding in places where environmental factors limit the success of flowering plants. They may be seen growing in moist shady woodland nooks, remote mountain elevations, dry desert rock faces, bodies of water, or in open fields.

Since the fern is flowerless, reproducing has adapted by producing feathery or leafy fronds which release spores from their undersides. *A spore is a unit of reproduction arising out of a single organism and is used as a mechanism for survival in unfavorable conditions. Ferns also have a self sustainable vascular system for the transport of water and nutrients so they are not as over-simplified as they may appear.


Naturally Ferns figure in folklore with legends about mythical flowers or seeds. In Slavic folklore ferns are believed to bloom once a year during a Mid-Summer night and one who comes upon a 'fern flower' is thought to be guaranteed happiness and riches for the duration of their life. Finnish tradition holds that one who finds and holds the 'seed' of a fern in bloom on Midsummer night will be able to astral) travel to the location where an eternally blazing 'Will o' the wisp' marks the spot of hidden treasure. This spot is protected by a spell that denies access to anyone but the seed bearer, who alone knows of the location.

Among the Native American culture ferns were eaten as greens, boiled into herbal teas, and woven into mats.  Different species were used to treat everything from digestive problems to arthritis and childbirth pains. moonwort, a type of fern known as 'rattlesnake masterpiece,' was said to cure snakebites and placing it about ones dwelling was said to ward off snakes. Australian Aboriginals used tree ferns to construct dwellings and when dry they harden to the strength of light weight lumber.


Recently there has been a horticultural effort to introduce unknown ferns to gardeners everywhere and this lovely gal is one of them... she made her way into my kitchen this spring and makes me smile everyday.

Posted by Catherine Dougherty at 8:34 AM