My Mimosa... her parting gift 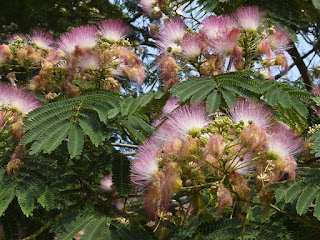 As I wrote in August of 2013, The Mimosa was introduced to the United States as an ornamental specimen in 1785 by Filippo Degli Albizzia, a Florentine nobleman. Arriving from Asia, it is also referred to as the Silk Tree for the texture of its flowers. The sweet scented flowers have long threadlike pink stamens which are white at the base. They bloom from June through July as stunning pink powder-puffs which drip with sweet nectar. Covering the trees, these blossoms attract hummingbirds, honeybees, and butterflies.


This species of tree likes it hot and dry and thrives in the southern regions of the United States with relative ease, growing up to three feet a year, and providing a lovely canopy of mottled shade allowing the grass to grow underneath the branches.


As with almost every plant and tree on the planet, the Mimosa has medicinal properties as well. The bark is a bitter and an astringent containing compounds which are used to shrink inflamed tissues. They are also used to relieve pain, and contain a sedative which was used to treat insomnia or anxiety. They increase blood circulation and thus treat heart palpations, and also act as a diuretic.

The lovely flowers were used to relieve a constrained liver and acted as an antitoxin providing a cleansing effect on the body. They have a sedative affect and were used for symptoms of anxiety, insomnia, irritability, and poor memory. The concoctions made from flowers also relieved pressure in the chest and gastric pain. Apparently the spectacular Mimosa was a cure all for many ailments and it is truly a loss that the ‘recipes’ for its many uses have been lost over time. 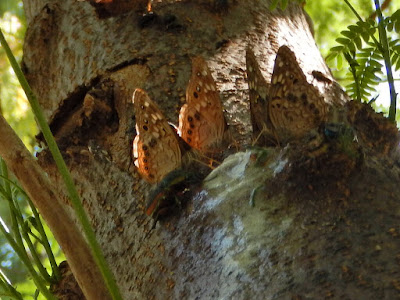 The life span of the Mimosa is but 10 to 20 years and sadly, mine has developed a contagious and fatal disease which is rapidly spreading across the South. The disease is known as Mimosa wilt and although it begins as a fungus in the root system, external symptoms include leaf yellowing and wilt by early to midsummer. Some trees die within a few weeks after first wilting but most die slowly over a year, branch by branch.


Prior to death, trees ooze a frothy liquid from cracks and grow sprouts on trunks. It is this liquid that is her parting gift for it must be amazing in benefits. An abundance of insects have collected at the outside juice bar, all sharing in peaceful harmony... I have observed no squabbles. Butterflies, house and horse flies, many species of ants, shiny green June bugs, bees, three species of wasps, including the notorious and agressive red one have all gathered at dawn to take their fill of the marvelous juice. 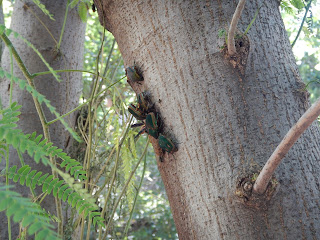 Posted by Catherine Dougherty at 8:42 AM