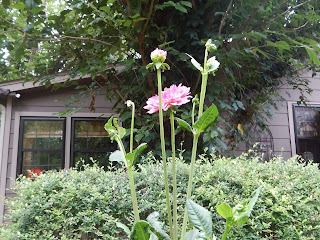 As with all flowers there is a rich and colorful history surrounding the Dahlia, which originated in Mexico where it was cultivated by Aztec empire. Amid little fanfare, the first Dahlias were introduced to Europe by the first conquistadores, who mistook the tubers for potatoes. However in 1769 tubers were sent to the Royal Botanic Garden in Madrid by the director of Mexico’s Botanical Garden and from this original stock three distinct species were developed which are still part of Dahlias today.


In 1872 J.T. Van der Berg of the Netherlands was sent a parcel of plants from a friend in Mexico. Though most of the plants were badly rotten he was able to salvage a piece of root that he tended until it grew into a healthy plant. He made cuttings from the plant during the winter of 1872-1873 and we have him to thank for the deep red Dahlias. Van der Berg named his darling Dahlia juarezii to honor the deceased Mexican President Benito Juarez.


The petals of his glorious Dahlia rolled backwards, rather than forward, and this form is believed to be the original, existing in Mexico before disappearing for hundreds of years. Nurserymen in Europe crossbred this plant with others and the results are our Dahlias of today.


Nurserymen, who seemed a hot-headed several centuries ago, verbally fought over who discovered, hybridized, and distributed the first Dahlias… the list is endless. In 1846, so popular were Dahlias, that the Caledonia Horticultural Society of  Edinburgh offered a 2,000 pound prize to the person who was able to cultivate a ‘blue‘…  a fete which has never been accomplished.


Dahlias fleshy root, prized for intense mocha flavor, is still roasted and used to flavor beverages in Central America. In Europe, prior to the discovery of insulin in 1923, patients were often given a substance derived from a form of fruit sugar extracted from the Dahlia to control diabetes.


The Dahlia likes sunshine will faithfully bloom for most of the season reaching their zenith in August. To assure constant blooms they must be dead headed, which is the process of removing spent blossoms. Today’s Dahlias run the entire spectrum of color, bloom size, and shape. From the darling miniature Humpty Dumpty to the dazzling giants with their sultry tangle of fantastic foliage and giant six inch blooms, there is a Dahlia to fit your garden needs… and now is the time to plant one.
* My Dahlia that wintered over here is over 7 feet tall!
Posted by Catherine Dougherty at 9:06 AM