The Antique Chambers Stove and the Stranger 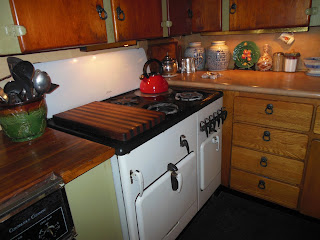 Easter week about 20 years ago, I decided to advertise a Chambers stove I had purchased at auction for $3. No one had placed a bid because no one wanted to move it and Michael wasn’t pleased I bought it. It was residing in the hay barn across the creek and so it was time it had a home. I figured $125 would be a dandy return on my investment so I advertised it in the Daily Oklahoma.


I got a call on Saturday and a lady wanted to come see it on Easter Sunday if it was not too inconvenient. Dinner here was scheduled for one thirty so I told her anytime before noon would be fine.


Virginia arrived and she was a sweet lady in her early fifties, a grand motherly type and as we walked to the hay barn I heard her rather sad story. Her husband of 20 odd years had left her for a younger woman and she was attempting to put her life back together. They were childless, her mother had passed and she was alone but she had bought a small house near OCU where she could see the bustle of students everyday. She wanted the stove since she had grown up with one exactly like it in happier times and she said she would arrange to pick it up later in the week.


Wow… I had not expected such a story and it pulled at my heart strings. I couldn’t fix her life, but I could fix her Easter so of course I invited her to stay for dinner. Virginia hesitated for a minute so I suggested I could certainly use the help. (The children were busy swinging from tree tops after way too much sugar and so they needed to stay outside!)


She accepted and got into the swing of things immediately as she followed me into the kitchen. We got out the Haviland and she set the table; we whipped mashed potatoes, buttered rolls, and filled Grandmother’s crystal water glasses. We sliced the roast, tossed the salad and by the time dinner rolled around, we were fast friends. I settled her next to me at the table and we had a lovely meal. Virginia joined the conversations and laughed at the delightful antics of the children…  she enjoyed herself immensely.

As Michael, the children and I walked her to the gate and waved goodbye, the kids looked at me quizzically and asked, “Mom, who was that lady?”

BTW: I gave her the stove...
Posted by Catherine Dougherty at 9:01 AM