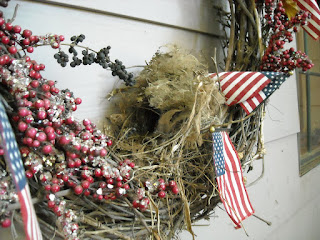 The lack of rain with humidity has made venturing outside quite uncomfortable since those of us native to Oklahoma are accustomed to dry heat. The ‘steamy/sweltering meter’ which is now included in the weather forecast is quite new to us and has taken a while to totally comprehend… it means hot and sweaty.  In looking back through my gardening journals, we have had several years of dismal weather in late spring with 2011 among the most memorable. That year no amount of watering helped salvage the garden with high temperatures arriving in early March and continuing until October. In spite of the occasional cool break this spring, it seems the heat is here to stay so watering is a must.


It is time to tidy the garden by removing the spent foliage of the Amaryllis Belladonna and Jonquils. It has already absorbed nutrients to send to the bulb that is resting below and recently became an unsightly mass of wilted yellow leaves. Once they are removed place a pretty flowering pot in an elevated container over the bare spot. Remember to relocate it when an emerging Amaryllis bloom first appears in mid-July but it may continue to reside over the Jonquils since they are through with their annual show.


Now is the time to venture out in the cool of the morning to scout the garden to look for the darling House Wren. She has probably made a nest in some odd place so finding it is an interesting scavenger hunt of sorts and a fun game for children. Wrens famously choose unusual sites for their nests, including door wreaths, lamp posts, garage shelving, and even old shoes that have been left outside.


As indicated by their common name, they are intensely interested in humans and often nest where they will receive our attention. They will make a cup sized nest of various materials including string and pieces of plastic and sit on three to seven creamy white eggs. Both parents will raise their young and the family will leave here for winter quarters in Mexico by early October.


Wrens arrive here in the spring with the male signaling his arrival with an almost incessant and distinctive stream of burbles, warbles, buzzes and rattling churrs. They are considered a songbird even though their wonderful song is heard only during the nesting season and rarely afterwards. Since the diet of the House Wren consists almost entirely of insects, spiders, snails, flies, ticks, plant lice, gypsy moth larvae, ants, beetles, and grasshoppers they are a valuable asset to the gardener for natural control of pests.


Small and overly confident, the brown House Wren is extremely territorial and will make efforts to destroy the nest of competitive birds. It is said they will occasionally destroy the eggs of other birds by breaking the egg shell. They have also been known to vandalize the cavity of other bird nests by placing sharp sticks in them therefore rendering them unusable. Regardless of this impolite behavior their fondness for humankind and elimination of pests makes up for it and they are a joyful little bird to have in the garden.

Tip: The children to played the game and discovered a Wren nest in the handle bar of Marshall Dougherty’s apparently unused exercise machine in his garage.


Photo: A nest in my seasonal wreath outside the back door.
Posted by Catherine Dougherty at 10:23 AM