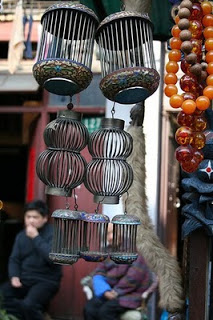 Luckily, the Asian fabric of choice is silk which is unappetizing to crickets for had it been wool the cricket's popularity would have suffered greatly. Years ago I pulled my 'good' white wool, Katherine Hepburn style, very expensive pleated slacks from my closet only to discover one leg was totally destroyed with cricket holes. Now whenever I hear them in the house I track them and gently place them outside to play!

Posted by Catherine Dougherty at 10:08 AM