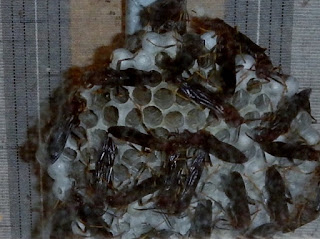 For most of the summer we have indulged in candid observation of the paper wasps who decided to make colonies on the underside of the awnings. They are called paper wasps for the paper-like construction of their nests which consists of small cubicles (or nursery rooms) wherein the infant wasp grows into an adult. A Queen will lay the eggs in the open cells while other females help build future nests. Once a queen dies, a new egg-laying female will take her place while the ladies in waiting care for her.


In our observations, the young wasp slowly emerges from a cubicle and then gently dries its body with a leg or two until all has expanded and fluffed out. Once dry it will fly away for a meal or take its place among the others who gather over the nest, guarding the growing infants.


The Paper wasps usually build their comb nests to hang from objects like twigs or tree branches, shrubs, porch ceilings, the tops of doorframes, eaves, or attic rafters…  imagine our luck in discovering three nests under the awnings where could easily view their antics from behind the safety of glass.


There are about 22 known paper wasp species in North America, and hundreds in the world. Similar relatives to paper wasps include the dreadful yellow jackets and hornets… both of which need little provocation to attack.  Paper wasps generally have a thin “waist,” with six long legs and an almost triangular side view as well as two wings and antennae. They are mostly brown or black with possibly some yellow coloration. The known paper wasp species share these colorations, but may also have different bands of colors and markings that separate them from one another. Some species of paper wasp may even have hints of bolder colors like red, or even brighter colored lines compared to others.


In early summer wasps, like bees, pollinate plants and flowers as they feed on nectar thus if we were to eradicate all wasps it could cause a substantial problem in the global ecology… with this purpose alone wasps prove they are a very beneficial insect. When you add other items to their menu which includes flies, garden pests, and destructive web worms, their value increases.


In the autumn, future queens will seek places to spend the winter and find their way indoors, possibly to a shed or garage where they will spend the winter.  In springtime they will emerge to build their signature umbrella-shaped nests and others will gather to them and begin the project of raising progeny.


To avoid being noticed by Wasps keep food covered when dining outdoors and since all wasps are exceedingly thirsty make sure children stay away from fountains and small bodies of water. Since flowers nectar is a favorite food source, avoid wearing strong flowery fragrances and when hiking opt for shoes that cover and protect feet from rogue wasps lurking in the grasses. From a safe distance, observing wasps is a perfect summer time pastime.


Of Trivial Interest: During my research I discovered a little known tropical species, the Jewel Wasp, who is a true hero since her prey is cockroaches. With her special venom she renders the roaches mindless and fearless taking away their will to escape as she feeds the living roach to her babies Hannibal Lecter style.  (*Good for her…Never feel sorry for roaches!)
Photo is outside my west window!
Posted by Catherine Dougherty at 10:08 AM