Fall is a Favorite Season 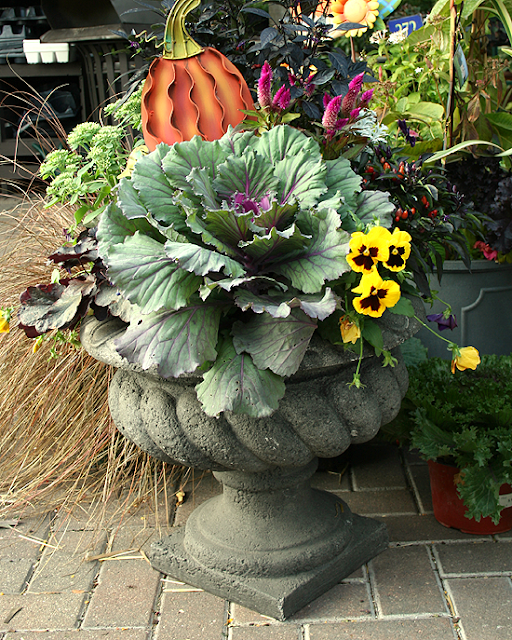 We had very unusual weather all summer with occasional cool spells which reminded one of New England. Quite suddenly Fall is upon us ushering in all of the beauty Mother Nature has saved for last.
This is the season most favored by many gardeners because of the quietude...  for a brief moment in time there is nothing particularly pressing and now is the time to enjoy the migrating butterflies and the multitude of darling dragonflies floating about.

Fall is a marvelous time to leisurely plant a container arrangement and there are many plants that not only survive the cold temperatures, but thrive on it. Among the most colorful is flowering or ornamental Kale and unless one has chickens or Peafowl, it will do well all winter. (*It is a favorite fowl snack.)


Kale is among the oldest of the cultivated edible greens and has been a staple in the garden for centuries. A form of cabbage native to the wilderness of North America as well as all of northern Europe, it added a much welcome green and leafy vegetable to dinner tables and soup pots during the winter. The ornamental Kale is edible but does not form the tight center ball common in cabbage. Exceedingly popular today, it arrives at the nursery sporting a multitude of interesting ruffled leaf combinations, from spires to tight rosettes.


Kale is round, dense and slow growing, making it a easy to contain. One of its most impressive attributes is the fact that the colors deepen as the temperature dips, meaning the bright white, vivid greens, purple, burgundy, blues and variegated colors become more lovely as the winter deepens.


The precious pansies have begun arriving in the nurseries and it is a wonderful time to plant them. Originally a common viola growing in fields and hedgerows in England they were cultivated by William Richardson, gardener to Lady Mary Elizabeth Bennett in the early 1800’s. Despite his efforts, their first noted appearance was on the estate of James, Lord Gambier. His gardener, William Thompson, began to cross various viola species with a viola tricolor in an effort to achieve a round flower of overlapping petals. In the late 1830s he found by chance a flower that no longer had narrow nectar guides of dark color on the petals but a broad dark blotch instead. From this pansy came the future ‘flowers with a face'; his hybrid was released to the public in 1839 with the name "Medora". This pansy and its progeny, including "Victoria" became wildly popular with gardeners and breeders throughout all of Europe.


If planted now, they will survive nicely over the winter and will have a head start in the spring. Such a cheerful, adorable little flower is always a welcome guest at the garden party and the color options are positively stunning, their faces delightful!
Posted by Catherine Dougherty at 8:32 AM