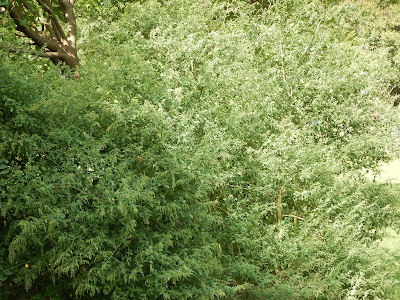 With the rains, our country side has once again greened and in spite of extremely hot and humid afternoons, the morning has contributed balmy conditions.  Everyone has emerged from summer heat-hibernation and gardening, walking, and morning coffee or tea on the patio are once again pleasurable. Unfortunately the rains have allowed production of unprecedented pollen... as though the trees and grasses are determined to make up for the former drought years by ensuring their reproductive place on the planet. I noted an overlooked plant near my chicken house... it is 8 feet tall with a 14 foot circumference!

Most flowers have heavy pollen, thus the necessity for pollination by bees or birds. The pollen of most trees, shrubs, and grasses is lighter than the pollen of flowers so it may be carried by the wind. Since our winds may go from a gentle breeze to a driving force in seconds this light pollen may travel hundreds of miles.


Over half of all allergy symptoms may be traced to ragweed and this year it is in disproportionate cultivation, appearing everywhere and ranging up to ten feet tall. It is supposedly a member of the aster family, although it is hard to believe such an illustrious family produced such an unlikable child. In the opinion of many scientists ragweed is the most infamous weed on Earth, producing some of the lightest pollen of all plants. A single plant may produce about a billion grains of pollen per season which may remain airborne for days and travel great distances. It has been noted up to 300 miles high and 400 to 500 miles out to sea.

Ragweed was originally native only to our hemisphere however they were introduced to Europe during World War II, traveling discreetly on the clothing of our soldiers. Since then it has spread rapidly and now Europeans suffer as we do with seasonal allergies. Ragweed is truly a nuisance this time of year as it is the source of itchy eyes, scratchy throats, runny noses, sneezing, headaches, dizziness, and the ensuing confusion that arrives with these symptoms.

It should be noted the ‘Pollen Report’ on the daily news channels is not an exact science, rather it is pitifully antiquated. Particles of pollen are collected in a box on the roof of the Oklahoma Allergy Clinic and counted… that is how the daily information is obtained. It is impossible to imagine how much pollen is traveling about outside the confines of the City, however it is an easy guess that it is considerably more than what is produced in a concrete jungle!

Since it is impossible to avoid pollen, we can simply take an allergy pill, press on, and enjoy this lovely season… Kleenex in hand just in case. And remember to change your pillowcase daily.
Photo is of the Ragweed tree outside my chicken house!
Posted by Catherine Dougherty at 10:13 AM