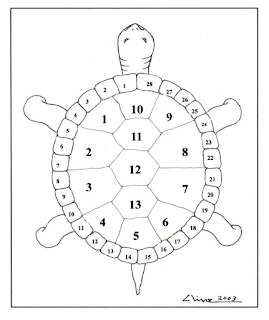 Twenty twenty has been quite a surprising year to date. Of course, it would not be complete without something of Cosmic significance so we have a most unusual happening … the month of October has two Moons. We shall have 13 Moons this year, which is in keeping with the Native calendar.Native Americans used the moon to tell time by counting from one new moon to the next, known as a lunar cycle. Native Americans assigned names to the moon for each month to keep track of the seasons. Each name is a symbol of what the moon meant to Native Americans by virtue of its use, guidance and influence in their daily lives.Based on these moon cycles, the Native American year is divided in to 13 moons with each moon being 28 days long. The cycles of the Moon are presented as a message on the back of a turtle as seen below. All Native years begin with spring, the time of rebirth and travel with the cycle of seasonal weather.
For non-Natives October's first full moon is the 'harvest moon' on October 1, and the second full moon will occur on October 31… a full 'blue moon' on Halloween.
The full harvest moon is the name is given to the full moon that occurs closest to the autumnal equinox. In 2019, the full harvest moon occurred on Friday, September 13.The full harvest moon provides light for farmers harvesting their crops into the night, according to the Farmer's Almanac and the moon will appear full for about three days.
October will also close with a full moon on Halloween. Typically, the next moon after the harvest moon is known as the' hunter's blue moon' for it is when hunters used moonlight to hunt prey and prepare for winter.
While a blue moon seems rare, a full moon on Halloween across time zones is even more rare -- an event that hasn't occurred since 1944. However, a full moon does occur on Halloween every 19 years in some time zones, so you can expect a full Halloween moon again in 2039, 2058, 2077 and 2096.
The full Halloween moon will rise at 10:49 am ET on October 31 -- which explains why the moon will be visible across time zones. This is also the last day of Daylight Saving Time, so remember to set your clocks back an hour on November 1 at 2 am.
Posted by Catherine Dougherty at 10:59 AM