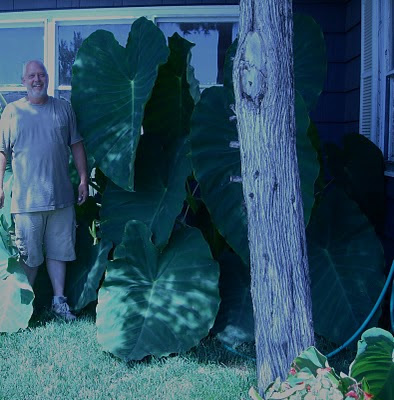 The amazing Elephant Ear (of the Colocasia family) has been in cultivation for over 28,000 years and because of this the exact origin of the plant has been lost. It has long been a major food crop in the warm climates of India, China, Southeast Asia, Indonesia, Polynesia, Africa, and South America. All parts of the plant are edible if they are thoroughly steamed or boiled to remove toxic calcium oxalate crystals. Anyone who has attended a traditional Hawaiian luau has eaten the cooked leaves and the corms are mashed into the popular poi.

After grocery shopping in El Reno on Saturday we happened to drive down Hoff Street and were positively stunned at the sight of the most extraordinary Elephant Ears. Grown by David Jensen, the stupendous, show-stopping plants lining a portion of his house were at least seven feet tall with leaves over five feet in length, four in breadth and still growing! Remarkable!

Luckily, David happened to be in his front yard and after introductions and his acceptance of our elated comments, he graciously explained his technique for raising such marvelous plants. His plants are six years old and had been purchased as standard bulbs at Wal-Mart. He occasionally amended the bed with manure and had a timer to assure they were watered frequently. Often in the heat, he runs a slow flow of water all night and believes the watering is paramount to success. Against the house facing east, they receive two to three hours of morning sun, by eleven are shaded by an overhanging tree and for the rest of the day shielded from sun by his home.

David digs his bulbs following the first light frost and when the leaves have been nipped. He has noted that although they began as standard bulbs, each year they have grown until now they are the size of a small basketball. He leaves about six inches at the top of each bulb and removes all the small tendrils which have grown over the season. After dusting off the soil, he places them in dry peat moss in the house for about a month so they can thoroughly dry. Some years he has dusted them with a fungicide, but admitted he had not last year and it had not affected the health of his plants. Once they are completely dry, David’s second stage of storage is placing them in a cool place like a root cellar where they rest in dormancy over the winter but do not freeze.

By mid-April he plants them and he has learned by successive plantings several weeks apart that all the plants will begin to emerge at the same time; apparently the earlier plantings will remain dormant until the soil reaches a proper temperature. David also plants the baby bulbs which have grown next to their parents and is experimenting with them to see if such mammoth growth is a genetic.

Base of the plant is the size of a bushel basket! 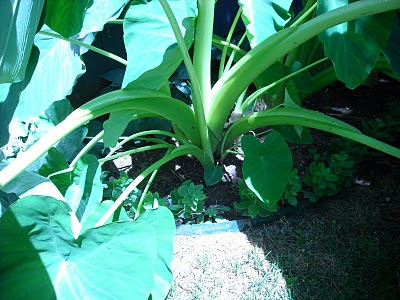 Posted by Catherine Dougherty at 12:00 PM