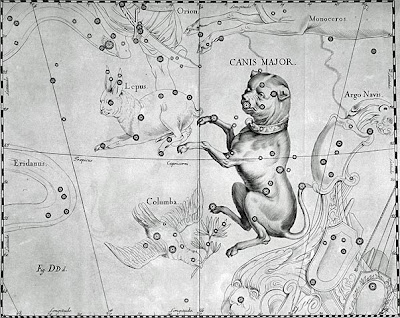 It is impossible to watch the wilting garden without wincing as the arrival of the ‘heat dome’ is extremely depressing for all who enjoy the outdoors. The heat dome is part of a summer weather pattern wherein a large high-pressure system… essentially a huge mound of stagnant hot air… arrives to park itself over at least one region of the country and the South Central region is the most popular for it. This hot air keeps out the rain and allows for a slow broil underneath it. However before science informed us of this cause, heat domes were called the ‘Dog Day’s of Summer’ and caused by a group of stars.

Notoriously sultry and unbearable, the name of these days occurring in the Northern hemisphere originates from the star Canis Major or Sirus, the big dog. During late July through August, Sirus is in conjunction with the sun, meaning they both rise at the same time in the sky. This led to the ancient belief that the miserable heat this time of year was caused by the star's effect upon the sun, making it hotter thus the 20 days before and after the conjunction are called 'dog days'. Regardless of the fact that the heat arrives now from the tilt of the earth rather than the presence of Sirus, some 50 million miles from earth, the long held belief the star is responsible is still maintained in many cultures.

It is easily imagined that the stars were a major influence on mankind before the night sky was obscured by artificial lighting and smog. Images from the pattern of the stars were drawn by 'connecting the dots' and each culture saw a different pattern emerge from such connections. From the Asians, Native Americans, Europeans, Persians, and so forth, each society created mystical explanations for the changing patterns in the heavens and the ensuing weather conditions. The star-pictures mapped in the night sky by our European ancestors are now known as Constellations.

Ancient people believed the dog days to be an evil time so accordingly, a brown dog was sacrificed to appease the rage of Sirus. According to the famous Greek Phiny (AD 23-79) there was an increased risk of attack by rabid dogs at this time so he suggested feeding them large quantities of chicken droppings as a preventative measure. By 1729 in the British publication The Husbandman's Practice, survival was intent upon mans ability to 'take heed of feeding violently'. This handy guide warns, 'The heat of the Sun is so violent that men's bodies sweat at midnight as at midday' and any illness may be worsened 'yea, very near death'. By 1813 in Brady's Calvis Calendaruim, it was said to be a time 'when the seas boiled, wine turned sour, dogs grew mad, and all creatures became languid, ‘causing to man burning fevers and hysterics‘. My grandmother maintained a cut will not properly heal in these days and that babies were vulnerable to a colic-like condition called ’summer complaint’.

Today Sirus appears several weeks later than in ancient times as the stars and constellations have shifted in relation to the Sun. Regardless of the cause of the heat, most certainly one must admit a feeling akin to 'hysteria' while dragging hoses this time of year!
Posted by Catherine Dougherty at 9:42 AM