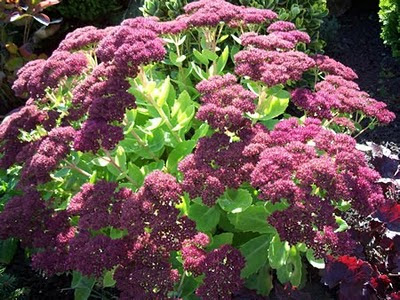 The late season garden presents challenges that differ greatly from the garden of early spring and summer. Since August usually includes high temperatures and little rain, one must plan for these typically dreadful conditions and include and array of sun loving, drought tolerant, late season perennials.

‘Drought tolerant’ sounds excellent now, and few plants tolerate dry conditions as well as the more than 300 species of the Sedum genus which is a native to regions in the northern hemisphere. Among the most hardy and durable plants the Sedum, or Stonecrop, is easy to grow, requires little care, and will endure where other plants will perish. The name ‘Stonecrop’ was actually given for their habit of living almost anywhere including mounds of stone, piles of gravel, or even tucked into chinks in a rock wall. Their plump fleshy leaves are their secret to survival as they store water for the plant to use during extremely dry spells.

Sedums come in all sizes, from mat-forming ground covers to stands of flower clusters that top 30 inch stems. Among the most popular is the Sedum ‘Autumn Joy’ whose flower buds have just begun to open as the heat dome arrived. As the first frost arrives and the rest of the garden has collapsed, the dried Sedum blooms will remain a visual interest if left intact.

Needing only well drained soil and full sunlight, the Sedum is not susceptible to pests who are repelled by the stout leaves preferring more tender foliage, however butterflies and bees are abundant about the blooms. Easy to propagate, simply break a leaf or stem from the Mother plant, shove it into a hole the size of an index finger, tamp the soil, lightly water for a week, and it will start a new plant.

Another interesting addition to the drought garden is Sempervivum Tectorum, commonly known as Hen and Chicks which were first recorded by Theophraste, a Greek botanist, during the 4th century BC. Grown under identical conditions as the Sedums, this fascinating little plant is a mat-forming succulent that produces clusters of rosettes. The parent rosettes are the ‘hens’ and the smaller rosettes that spring from them are the ‘chicks‘. Children find the plant’s habit of producing ‘chicks’ extremely interesting, making it a wonderful way to lure them to the garden.

Both Sempervivum and Sedum are considered ‘Old World Treasures’ and are associated with mythology. The Romans called them ‘Beard of Jupiter’ and planted them on roofs to guard against lightning; the name of Sempervivum tectorum is taken from the Latin tectum, meaning roof . This myth spread throughout Europe to Ireland and in Scandinavian countries both plants were called Thor’s Helper’ where they were believed to drive off demons and guard homes if planted on roofs. According to folk wisdom, one may hang sedum on a wall in midsummer to ward off lightning strikes and it may also be used to foretell the outcome of affairs of the heart. Both are reputed to have medicinal benefits and to boost energy, however today they are best used as ornamentals.

As the heat continues, these plants may indeed be considered treasures!
Posted by Catherine Dougherty at 8:58 AM