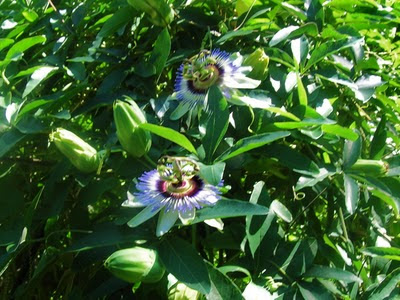 As the month of August reaches full fruition, gardeners everywhere are either enjoying or awaiting the blooms on their Passion Vines. With over 400 species from which to choose, this genus is prized for its extraordinary and showy flowers. The flowers are characterized by an intricate center which contains both sexes, making it unusually complete unto itself. In other words, it does not require pollination from a separate plant to reproduce.

The Passion Vine is a member of the family of Passiflorales of which herbs, trees, as well as the vines are all members. The papaya is the most famous fruit, appearing on a tree which resembles a palm. A cousin of the Passion Vine, the Mapop, grows in wild abandon all over the south. Climbing over fences, trees and stone walls, this sweet vine produces a fragrant flower only the size of a small chrysanthemum.

The plant was first discovered in Latin America by Catholic priests in the 1500's. They named the plant for the suffering and death of Jesus for they felt parts of the flowers symbolized the Passion. The five petals and five petal-like sepals represented the ten apostles who remained faithful to Jesus. The circle of hair-like rays raised above the petals was said to resemble the crown of thorns. An avid gardener once had a different explanation and told his reason for its name. He confessed to watching the vine each day, waiting and waiting... and wanting a flower in a way he usually reserves for wanting a woman...with a passion. 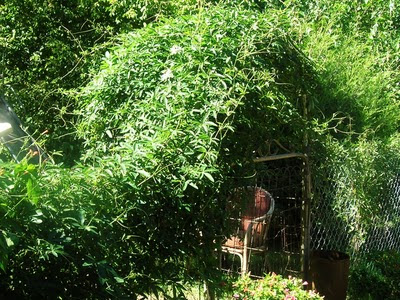 *The vine will grow to astounding proportions in several seasons. It must be mulched to over winter properly unless located in semi-tropical locales.
Posted by Catherine Dougherty at 6:27 AM