Although this subject has been broached before, it bears repeating about now. Almost overnight it seems the semi-dormant gophers and moles have become incredibly active. Since they are a problem of fairly vast proportion to the gardener, a brief description of their physical appearance and habits might be helpful. They are rodents and require strong measures to eliminate and exterminate them.

Gophers live in long, complex tunnels below the ground. They dig with their powerful front feet and their sharp teeth. Their bodies are well suited to their lifestyle below ground as they have poor eyesight and move slowly. Most of their lives are spent digging and patrolling their tunnels to protect their territory from other gophers. Their tails are hairless and tactile; it is an organ of touch which can “feel” as the gopher backs up in his hole. Their food choices include the gardener’s favorites…vegetables, buds, grass, nuts, roots and bulbs. They can totally decimate a lovely garden in very few days. In fact once I watched as a stalk of Asparagus was slowly pulled below, one jerk at a time until it disappeared. A gopher’s home is recognized by the large mound of earth above it. It is said their nest is usually about a foot below ground and lined with leaves, although digging like a mad woman has never revealed anything of the like.

The mole is a fast, tireless digger whose body is shaped for burrowing. With its narrow pointed nose, its wedge shaped head, and its large forelegs, it is a virtual digging machine. The forepaws, especially designed to scoop the earth, are hinged sideways on the mole’s body and equipped with large broad nails to act as a shovel. They are almost blind and although they have no external ears, their hearing is excellent. Their diet consists mainly of insects and worms, rather than plants, and their tunnels are dug so their food falls into them and are easily collected by the foraging marauder. If one sees a new tunnel being dug, it is possible to ‘catch’ it with the door open and flood it with a hose. The almost-drowned, gasping mole will emerge where it may be smashed with a shovel, thus eliminating one. However, like mice… there is never just one.

*An odd bit of history is that that moleskin was once quite popular for coats, gloves and hats. It is warm, soft, thick and lightweight; gray fur was preferred, but brown and black were also used. In my opinion collecting enough for a coat would be a mammoth chore.

Now with an understanding of the habits of the two, methods for extermination must be examined. For the gardener, dropping bits of poison into gopher mounds is ineffective as it seems to be the equivalent of giving them a vitamin tonic. And the old wives tale about dropping Juicy Fruit gum into a mound and it will destroy the digestive system is totally false. The “bomb” one may obtain from Tractor Supply to drop into holes (in spite of being extremely fun to use) is ineffective as well. Flooding gopher mounds with a hose makes an unsightly mess and often the water will completely destroy a flower bed by imploding the underground burrows leaving deep crevices in its wake. Trapping is time consuming and a full time job that never seems to work. Waiting for the emerging gopher with a gun in hand is ultimately a waste of time for it seems they ‘sense’ danger and never appear.

The easiest and most efficient way to eliminate these pests is to purchase a marvelous invention which attaches to the exhaust pipe of your car and then to a simple garden hose. When the engine is running you can fill the burrows, tunnels, or holes with highly toxic, extremely fatal carbon monoxide exhaust. Available at Ace and True Value Hardware stores for only $16.95, it works! This handy device is guaranteed to provide hours of Fall fun for any gardener!!

*A Man can spend years trying to bag a gopher! 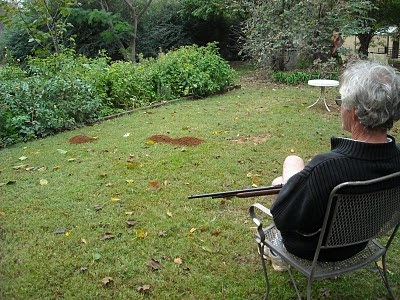 Posted by Catherine Dougherty at 1:11 PM