Years ago as I was waiting in the car at Auto Supply I noticed a gorgeous vine twining about a fence adjacent to the alley. The vine had lovely leaves which were veined with deep purple and the exquisite pink and lavender flowers crawling along the tendrils resembled tiny orchids. Electric purple bean pods were scattered throughout the mass of leaves and flowers creating a stunning display. Thus was my introduction to Hyacinth Beans. When I rang his door to tell the gardener of my admiration and inquire about them, he gave me an overly generous bag of seeds which were absolutely adorable... they are black, brown, or speckled with a half circle of white at the joint making them smile!

The plants come up in the garden within a week, bloom within twenty days, have a high heat tolerance, and will travel over twenty feet in a single season. Planted on the fence, the light pole, or anywhere one desires a charming screen, this vine is truly a remarkable joy.


Another climber is the magnificent morning glory. They are an ancient flower that has been traced back to China where they were used for medicinal and ceremonial purposes. The Japanese first cultivated the flower for ornamental use in the 9th century and it is celebrated in both culture and art. 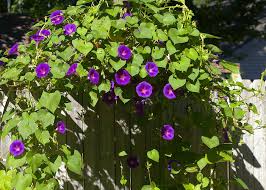 Artifacts indicate that over three thousand years ago, many South American civilizations had discovered adding morning glory seeds to the substances from the rubber tree produced a bouncing rubber ball. The sulfur in the seeds was the key and the ancients used the exact same process supposedly ‘discovered’ by Charles Goodyear for his tires in 1844.

The flower lasting but one day led to romantic folklore and in Victorian times the fleeting flowers represented the fickle nature of love while the profusion of new blooms symbolized the renewal nature of affection. At that time images of morning glories were used on tombstones where they were a symbol of the shortness of life.

Besides the traditional blue there are many new varieties in an astounding array of colors making this charming vine a welcome addition to any garden. With drought and poor soil tolerance, rapid growth habit, and amazing twining ability, the morning glory has long been used to shade porches... the ease for climbing a trellis provided cooling relief on hot summer days.
*Collection and storage of the seeds is economical however it should be mentioned the seeds contain a hallucinogen... thus the seeds must be stored away from children and pets.
Posted by Catherine Dougherty at 10:23 AM